During his three months stay in Oslo as a visiting professor with the Research Group in Natural Resources Law, Tauhidur Rahman from the University of Arizona has initiated two research projects together with Endre Stavang, professor at the Department of Private Law. 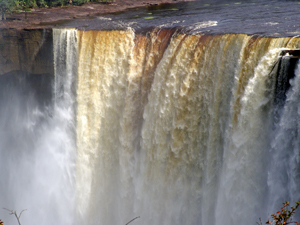 The first project is directly relevant for water legislation in the European Union. The second project, an empirical comparative study of how different deductibles in housing insurance are affecting people’s behaviour in Norway and the United States, will be of practical use both for insurance companies and public authorities.

EU is eager to design environmental laws. However, should the EU  go for uniform standards  or open up for differentiation? What are the legal, administrative and political challenges? In the U.S, also consisting of different states with different histories, economies and constraints, they have mixed experiences with drinking water policy.

An example: Recently the U.S. federal agency reduced allowable arsenic content in drinking water from 50 billion per parts (bpp) bpp to 10  bpp. This resulted in a huge controversy, some states even suing the federal government. Arizona, for instance, has a naturally high concentration of arsenic in the groundwater, which implies higher compliance costs.

Arsenic can result in cancer or cardiac problems. If you do a benefit-cost analysis of a reduced arsenic standard, how many lives will be saved and does it make sense economically? When it comes to resource management, what are the costs involved in monitoring and enforcing the rules? It is also important to consider “government failure”, due to the political pressure and potential regulatory capture from companies that are not interested in complying  with the arsenic  rules.

So far Rahman and Stavang “suggest that the case for a uniform European water regulation is more complex and tenous than advocates would normally concede once administrative and other enforcement realities are taken into consideration”.

Housing insurance contracts have a variety of policies concerning natural disasters, with different deductibles. The research project initiated is an attempt  to test the role of deductibles in affecting the environmental hazard behavior or actions of homeowners, regarding the protection of their property against natural disasters. Do low deductibles create moral hazard problems? That is, if  deductibles are low, do people care less and become inattentive in their preparedness for natural disasters?

Currently, Rahman and Stavang are  collecting necessary data. More specifically, data is being collected from different sources, including private insurance companies and government bodies like Statistics Norway. They will also compare similar insurance policies in the U.S., Arizona in particular. During Stavang’s planned research visit with the University of Arizona, from august 2012 one year on, significant parts of the research will be completed.

Their hypothesis is that high deductibles will positively influence the behaviour of households regarding their property against potential natural disasters. But other things might matter, like socio-economic status, living in rural or urban areas, climate etc. This has to be tested empirically, using the data.

Knowledge of why some people are more careful will be of interest to insurance companies and public authorities, making it possible to mitigate damages and minimize losses by proactive measures; like information campaigns and emergency preparedness. Also, the comparative study of Norway and the United States will further provide new insights into different designs of insurance policies and their effectiveness.

The Research Group in Natural Resources Law has -- with its multidisciplinary and international scope – attracted attention world wide. Partly due to this, Endre Stavang was invited to give guest lectures at the University of Arizona two years ago. The University of Arizona has established both an campus-wide umbrella institute for the environment as well as interdisciplinary programs at the law school covering property, energy and the environment. This makes it a very good match with the University of Oslo and its Natural Resources Law Group.

This was the starting point for the two research fellows to explore future joint work. Rahman is excited about the Research Group and also wanted to visit the university of Ragnar Frich and Trygve Haavelmo, the  two Nobel prize winners in economics. These were additional reasons for choosing Oslo for his sabbatical leave.

As Rahman is an economist interested in the economics of environmental law and Stavang a professor of law interested in economic analysis of law, the interdisciplinary approach should be well secured.

By Kirsti Aarseth
E-mail this page