The research group focuses on two “pillars” as areas of priority for their research in Norway, the Nordic region, and the Global South: 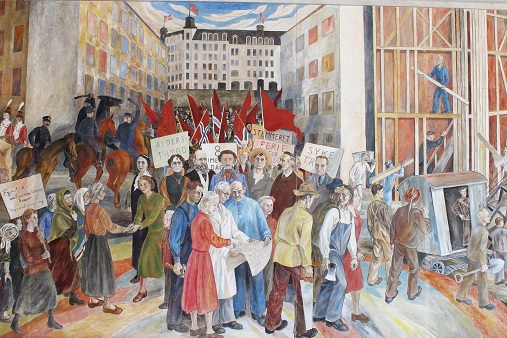 "The history of the labor movement in Norway" by Reidar Aulie (excerpt). Photo: UiO.

The two aforementioned pillars intersect in a number of areas, but they also raise many research questions of their own. Questions regarding welfare (particularly social, economic and cultural rights), equality, and discrimination require an individual and user-oriented approach. A common field of interest is therefore the law’s effect on groups and individuals in vulnerable situations and phases of their lives.

The group regularly hosts lunch seminars and workshops with both internal and external participants. It uses these events to support the publication and dissemination of its research findings.

VERDI is administered by a steering committee, consisting of the following members:

Gender identity and sexual orientation in international and national (Norwegian) law
The project takes the situation of people not conforming to the traditional binary gender model as its starting point. It focuses on the right to a legal identity, the right to health, and the right to dignity, integrity, and autonomy.

Read more about the project Gender identity and sexual orientation in international and national (Norwegian) law.

Capacity building at the law faculties in southern and eastern Africa
The project focuses on capacity building in law faculties at universities in Zimbabwe, Malawi, Zambia, Kenya and Norway. The aim is to contribute to democratisation and development through the promotion of the principles of equality and non-discrimination, as well as the support of fundamental social and economic rights in the law curriculum, teaching, and research.

VERDI is the continuation of the now completed research project on Rights, Individuals, Culture and Society (RIKS). One of the aims of RIKS was to strengthen ongoing research, as well as initiate and bolster recruitment for new research. Another goal was to develop research networks, both national and international.

One of the main research topics of RIKS was the concept of rights, as illustrated by developments in the legal status of individuals. This concerns research fields such as educational law, labour law, social law, family law, legal aid law, and developmental law.

Host institution
The Department of Public and International Law