Launch of "Writing Democracy: The Norwegian Constitution 1814-2014", edited by Karen Gammelgaard and Eirik Holmøyvik, at Domus Bibliotheca, Faculty of Law. 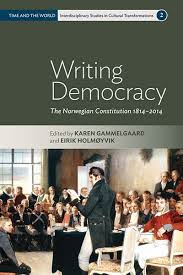 The Norwegian Constitution is the oldest functioning constitution in Europe. Its bicentenary in 2014 has inspired the analyses in this volume, where contributors focus on the Constitution as a text to explore new ways of analyzing democratic development. This volume examines the framing of the Norwegian Constitution, its transformations, and its interpretations during the last two centuries. The textual focus enables new understandings of the framers’ negotiations and decisions on a democratic micro level and opens new international and historical contexts to understanding the Norwegian Constitution. By synthesizing knowledge from different realms - law, social sciences, and the humanities – Writing Democracy provides a model for examining the distinct textual qualities of constitutional documents.

Read more about the book.

Brief presentations of select chapters of the book