UiO The Faculty of Law Department of Private Law
Main navigation
Back to uio.no
Sub navigation Menu
Research > Research news and events > Research news > It is difficult to believe that a Norwegian-style EEA solution would work for the UK

For the Norway model, with some kind of EEA-type solution to work for Britain, British politicians must be able to look beyond the traditional political divides, according to a UiO researcher. 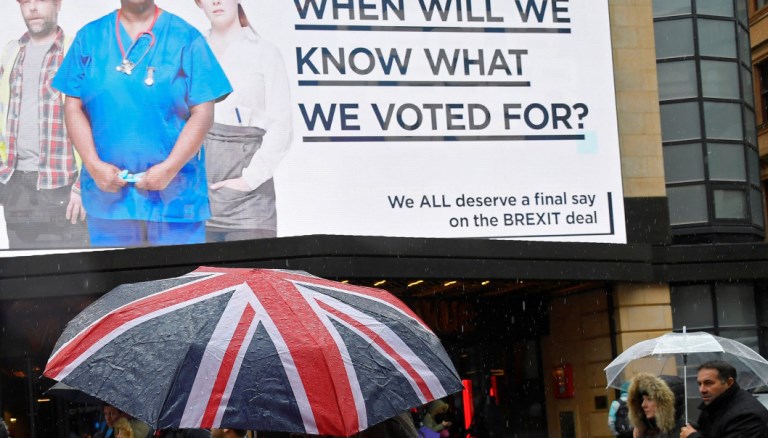 Brits who voted for Brexit are wondering what they actually voted for – here expressed on a poster at Leicester Square in London earlier this spring. The British government is also trying to work this out, and the Norway model is one of the options they are considering. (Photo: Reuters / Toby Melville)

The United Kingdom is leaving the European Union after 45 years’ membership. Since the Brexit vote, the British government has rejected all the existing models and is looking for something new. In its search for the best possible outcome, the government is nevertheless assessing existing solutions, including the Norway model.

However, Professor Hans Petter Graver is not convinced that a Norwegian-style solution, based on the EEA Agreement and other special agreements, will work for the United Kingdom. He is one of two authors behind the new book Squaring the circle on Brexit.

“In light of the British tradition, it is not easy to imagine how they could replicate our way of doing things,” says Graver.

The EU debate in Norway ran across party lines

One aspect he draws particular attention to is the different political climates in the two countries. When Norwegian politicians were trying to work out how Norway should adapt to the EU, there was broad political debate. During the referenda on EU membership in 1972 and in 1994, this debate traversed traditional party lines. In other words, which political party you belonged to did not determine your view on EU membership.

Another important factor is that although Norwegians had different opinions on EU membership, most of them shared the same basic values, such as social justice and trust in institutions. Britain has a different political climate, according to Graver.

“Norway has a political tradition characterised by consensus. The starting point for the debate was strong consensus across political parties about Norway’s adaptation to the EU, in which democracy and sovereignty were the two main principles.”

“What happened in Norway with the EEA was that most issues regarding adaptation to the EU were depoliticised. Without a similar depoliticisation, it is hard to believe that an EEA solution would work for the UK,” explains Graver.

The Norway model is more than just the EEA Agreement

The European Economic Area (EEA) Agreement – with Norway, Liechtenstein and Iceland as members – was the result of lengthy negotiations between the European Union and the individual nations’ governments. The point of departure was that these countries all wanted to define a relationship with the EU without becoming full members. The EEA Agreement means that Norway can take part in the EU single market through its own institutions, but has limited influence in the preparation of the regulations.

Graver points out that if the UK wants to adopt the Norway model, it is not only a matter of EEA membership.

“The question of whether an EEA solution would work for the UK is complex. Norway’s relationship with the EU is not only about the EEA, but also includes a large number of different agreements,” Graver explains.

In addition to the EEA Agreement, Norway has signed the Schengen Agreement on passport-free travel and the Dublin Regulation on refugees and asylum policy. In addition, Norway is linked to the EU through agreements on police cooperation and defence cooperation. All of these agreements relate differently to changes in the EU rules. And the content of the agreements also varies among the EEA countries Norway, Iceland, and Liechtenstein,” the professor explains.

The UK attempting to square the circle

In this new book, the authors use the metaphor "squaring the circle". They regard Brexit as a process that is trying to turn a circle into a square. Graver elaborates:

However, Graver points out that these conflicting wishes are reminiscent of how Norway wanted to preserve its national sovereignty, while still seeking a close relationship with the single market. The professor therefore believes that the United Kingdom may nevertheless have something to learn from the Norway model.

“Norway’s experience shows that it is possible to reconcile seemingly contradictory wishes, if there is a strong enough will within both the European Union and the United Kingdom. This is an experience that may be useful for the way forward for Brexit, even if the final result is not a Norway-style solution”.

By Eva Dobos
E-mail this page