Elisabeth Myhre Lie will be defending the thesis "The Different Police. Ideals and dilemmas in the preventative dialogue-based efforts of the Norwegian Police" for the degree of PhD. 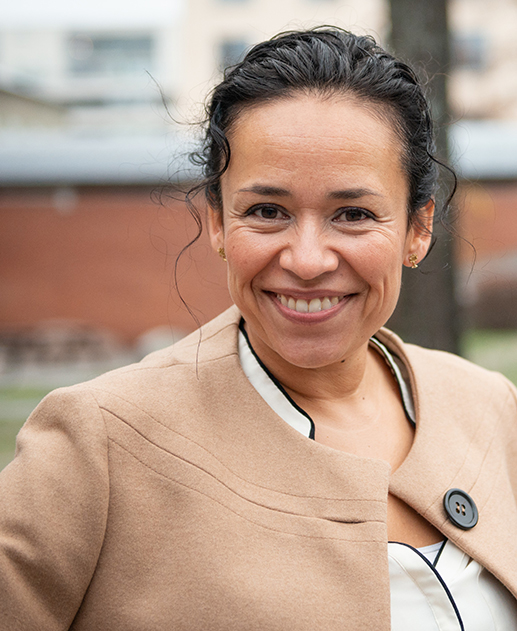 Please note that the disputation will be streamed and some of the seats behind the candidate and the opponents will be visible for those who are watching.

Link to participate by zoom will be available HERE

This study concerns three police units, all three of which work using dialogue as a preventive method. Two of the units are subordinate to the Oslo Police District and one is subordinate to the Norwegian Police Security Service (PSS). The study examines the preventative dialogue-based efforts carried out by the Dialogue Police, Radicalisation Contacts and the PSS.

The study explores employees’ perspectives on their preventative dialogue-based efforts and analyses ideals and dilemmas found in the narratives of the informants. The study shows how the police’s understanding of its role and professional identity are influenced by the idea of the dialogue-based police role.
Even though the informants work in different police units with different tasks and target groups, their main narrative is that they view themselves as dialogue experts. They share a common cultural identity as a different police, where both their work and roles stand in contrast to the ordinary police. They work on prevention, while others work on combatting. They work using dialogue, while others work using control. They work on facilitating expression, while others work on uncovering criminal offences.
The dialogue experts present themselves as a police force that wants persons and groups who otherwise have a strained relationship with the police to perceive them as a cooperation partner and not as an opponent. At the same time as they present themselves as a different police, they express that they are proper police. They are different, but nothing other than police.

The informants in this study identified themselves as preventers but not as traditional preventers. They work closely with the traditional parts of the police, such as the patrol service and the traditional preventers. The informants operate in the area of tension that exists between the requirements in the orthodox police culture to be proper police and their own and target groups’ expectations related to being a different police. This causes them to experience the tension between different sets of logic and loyalties. They experience different and, in part, conflicting expectations from management, colleagues, target groups and society at large. The continuously shifting perspectives create a nuanced, diverse and, at times, contrasting view on their own work. It also causes them to construct what they view as a new type of dialogue-based role in the police, where they represent a continuation, but also a renewal of the police culture(s).

The informants connect their work to the crux of the fundamental role of the police in a democracy: to prevent criminal offences and to protect constitutional values such as freedom of expression and assembly. Prevention of crime is a result of negotiations between the police and the public. They negotiate both in terms of what the problem is and the appropriate solutions thereto. Through conversations, they create a joint project between themselves and the public.

The informants in this study are police constables who use communication in order to prevent serious crime, violent riots and to protect the security of the Realm. They consider themselves to be an important part of the democratic function of the police. They are concerned with protecting and facilitating in relation to persons and groups who many people find provocative and undesirable. They view themselves as the protectors of freedom of expression for extreme, but lawful, expression. They are concerned with society tolerating those who are chaotic, loud and who offend others. They consider it crucial that the police protects the freedom of expression, including when this is perceived as most difficult. As stated by one informant: “I completely disagree with them, but I will fight for their right to express themselves”.
Many of them have important roles in the lives of lonely individuals. Making a difference feels good, but at the same time they recognise the dilemmas it causes. Working closely with persons and families causes many of the officers to become concerned with the unintended consequences of their own good intentions and measures.

The study outlines an ideal where the police is a cooperation partner for groups in society who are otherwise looked down upon or viewed as undesirable. The informants want to listen to these groups’ narratives about the police, in order to thereby adapt the preventative efforts so that they have the least stigmatising effect possible. The informants are concerned with the police’s practices not merely preventing and facilitating freedom of expression, but that they are also implemented in the most inclusive and protecting manner possible.