According to Eurostat statistics, close to half a million third-country nationals are ordered every year to leave the EU and Schengen areas. Those who do not comply with an order to leave within the period granted to them, and those who are not given an option to leave on their own, are required to be removed by the authorities of the host state. 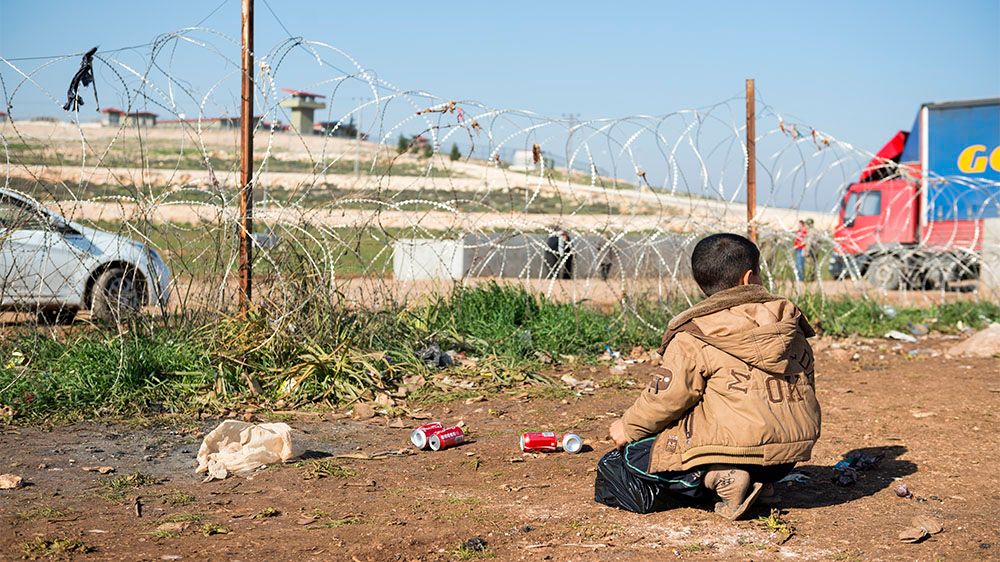 A Syrian boy living in the refugee camp at Atmeh, located in Idlib province near the Turkish border.

– With the thesis Forced Return of Migrants to Transit Countries my intention is to contribute to filling this gap in the literature, says Özlem Gürakar-Skribeland.

– I have analysed the “where” of forced return broadly and systematically. Not just in respect of persons who need protection but also for those who do not need or claim protection. I have approached the issue from different legal angles, trying to encompass the big picture and draw connections between different parts of international law.

The PhD thesis analyses the lawfulness of returning irregular migrants by force to transit countries. It uses returns to Turkey as a case study to illuminate the legal dilemmas. This is a complex topic but highly relevant for current international and European law, policy, and practice.

– I approach the issue from three separate angles: human rights law, refugee law, and general international law. The human rights law discussion analyses the extent to which the forced returns I study are compatible with the returnees’ human right to freedom of movement. The refugee law discussion questions whether Turkey qualifies as a safe country for purposes of returning asylum seekers under EU asylum law. Finally, I engage in a high-level discussion on whether international law limits state authority to make forced transfer arrangements in respect of non-nationals by requiring a connection between the individual and the receiving country, says Özlem Gürakar-Skribeland.

Much has been written on different aspects of refugee protection in Turkey in the past several years. However, the study differs from existing research by analysing Turkey’s protection regime against the requirements of EU law, in particular by focusing on refugees’ access to the labour market in Turkey. While there is considerable research laying out the difficulties that refugees face in the labour market in practice, the legal framework itself has been underexplored.

– In addition, all key EU legislation relating to asylum, migration, and return is undergoing substantive changes at present. The proposed amendments have major implications for return generally and forced return and return to transit countries specifically, and I factor factor this ongoing process into the analysis. Finally, I question forced return also on a more fundamental level, by connecting it to a higher-level discussion on state authority over non-nationals under international law, explains Gürakar-Skribeland.

The right to elect a destination is a human right

Gürakar-Skribeland argues that the human right to leave, which forms part of the human right to freedom of movement, comprises, as one of its elements, a right to elect a destination. This has major implications for irregular migrants facing forced return to transit countries, such as Turkey.

– To be clear, what I mean by “election of destination” is a right to choose the country of return among the options that may be legally available to the person. This is not intended to imply a right to enter any country of the person’s choice, says Gürakar-Skribeland.

Secondly, Gürakar-Skribeland shows how EU asylum law is moving away from “hard criteria” for purposes of determining whether a country is “safe” for returning there asylum seekers with unmet protection needs.

– The relevant EU rules are indeed being substantially re-written at present. The proposed changes would clear potential formal obstacles against returns to Turkey and effectively rate the very same Turkey as a “safer” country than it does under the current rules. The focus is moving to the content of the refugee protection provided in the country of return but even when we assess the protection provided by Turkey under the proposed unambitious criteria, it is doubtful that Turkey qualifies as a first country of asylum or safe third country for purposes of EU law, explains Gürakar-Skribeland.

Finally, Gürakar-Skribeland argues that developments in international law would justify, and may even require, seeking a forced readmission/admission system which does not privilege state interests over all others. Instead, it should strike a reasonable balance between the interests of states and individuals and the requirements of the rule of law. According to Gürakar-Skribeland, this would involve looking for an appropriate connection between the person and the receiving country.

Revisiting the human right to freedom of movement

The thesis shows a very broad overview of the relevant material and deep insights into the different legal areas that you have included in the study. Did any of these findings surprise you?

– I am particularly surprised by the freedom of movement part of my research. The Human Rights Committee has said in the past that election of destination is part of the human right to leave, including for those foreigners who are in a country illegally and who are being expelled. Similarly, the European Court of Human Rights routinely states that the right to leave “guarantees to any person the right to leave any country for any other country of that person’s choice to which he or she may be admitted”. But these statements are always made in passing: I have done extensive research and have not encountered any cases where either body has directly dealt with this issue before, says Gürakar-Skribeland.

Recently, there has been an increased interest in revisiting and further exploring the right to leave. This has been done in the context of departure prevention and how various measures aimed at preventing departure relates to the right to seek asylum and the prohibition of refoulement.

– What I have done is something different: I have explored the right, and in particular the election of destination component of the right in the context of forced return, explains Gürakar-Skribeland.

The thesis Forced Return of Migrants is part of the interdisciplinary research project "Transnationalism from above and below: Migration management and how migrants manage" (MIGMA) which examines European attempts to return migrants. MIGMA is financed by the Research Council of Norway.

By Maud Hol
E-mail this page