Codification and constitution. The Constitution § 94's requirements to lawcodes in Norwegian history

Did a constitution based on the universal principles of the rule of law and freedom of speech also demand a revision of current legislation? Were there universally recognized norms which ought to be enshrined in a new legal codification? 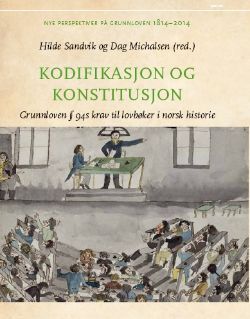 Before 1800 the writers of the Enlightenment and legislators developed codification (law books) as a way to legislate a central part of the Law, into one coherent and systematic legal text . After the French Revolution of 1789, very soon a close relationship between the idea of codification and the idea of constitution took form. Did a constitution founded on universal principles of the rule of law and freedom of expression also demand a revision of the current legislation and were there universally recognized norms that should be enshrined in new legislation? The debate became an important element during the formative years of the new Norwegian state. According to the Constitution's § 94 demanded the preparation of a new legislation for Norway, both a new civil - and criminal code. And this should be put in place as soon as possible. The idea that a new constitution also called for the revision of general legislation is also found in other countries in this period. In among others, the Swedish, French and American constitutions, there are corresponding provisions that probably inspired the Norwegian founding fathers .

After 1814, extensive legislative measures were initiated in a number of fields, but the major codification lagged. The legislation of the absolutist era within civil law, procedural Law and criminal law remained throughout the 1800's, and in the case of family law it partly stayed into the 1900s and both courts and government had to make do With creative interpreations of two centuries old regulations. ​​Several attempts were made however of comprehensive legislative work and a new Penal Code was passed in 1842, a new Civil Code never appeared. The period saw many lively debates of the  on the consideration of homely tradition and universal principles. While one would like to retrieve the latest news from the new Sardinian civil code, others foundit absolutely disgusting to look further afield than the old country, Denmark. The debate was international as well as Norwegian and Nordic.

This project will firstly examine the theoretical and practical relationship between constitution and civil code and also offer some examples from outside Norway of experiments that were done in designing new law codes in line with constitutional principles. Secondly, it will study the first three major codification projects in Norway of the 1800s: criminal law, civil law and the Military Penal Code; later from the late 1800s and 1900s came the Nordic legislative and civil code commission which may well be regarded as a late response to the Constitution's § 94. The subject has overall been studied very little in Norwegian and Nordic research and the project aims at treating the topic in a multidisciplinary manner.

The project is organized as research and into a series of seminars. The project has resulted in an anthology published by PAX Forlag in 2013.

The project is part of the project  New Perspectives in Constitutional History (NFR / 1814 project). The project builds on established interdisciplinary research and is aimed at different forms of communication. The project is a collaboration between lawyers and historians from the universities of Uppsala, Turku and Oslo.