This project examines the relationship between the Constitution and the question of political competence of the state's citizens. 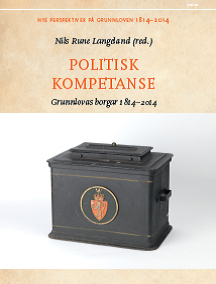 The varying voting arrangements of written Constitutions have changed dramatically over time and in modern times politics have been parliamentary in the wide sense of the word . It puts the issue of the citizens’ political competence by the Constitution up front. The political processes concentrated around an elected parliament are many things at once . In part it is a public power theatre. In some relations, it appears as an open rational discussion based on scientific knowledge. In other situations it involves a negotiation of different social interests. At times, many think that it is about agitation, demagogy and propaganda. Through all this there is a legal discourse. What matters is that it is quite impossible to pinpoint the precise relationship between all these versions of the political process.

These observations are of great importance in order to get a more historicizing and non- teleological analysis of what the citizen’s political competence has been in various stages of constitutional history. How have issues such as the relationship between the state’s citizens, the Constitution’s definition of voters and who can formally be active decision-makers and legislators in society, been discussed? The demands of the 1800s in relation to expertise that partially coincided with political skills, was from the late 1800s met with democratic criticism. But the question about the nature of the citizen’s political skills persists as an issue in today's vast central governmental schemes and widely driven academic specialisations. The issue of the Constitution’s changing perception of political competence is not just a discussion about who has the expertise, but just as much about what is considered politics.

This project aims to provide various types of analysis on this important topic concerning how society constantly generates new perceptions of what is a natural definition of political competence in constitutional states and democracies.

The project is organized into research and a series of seminars. The project will result in an anthology published at PAX Publishing in 2014.

The project is part of the New Perspectives in Constitutional History (NFR / 1814 project). The project builds on established interdisciplinary research and is aimed at different forms of communication.