This book approaches law as a process embedded in transnational personal, religious, communicative and economic relationships that mediate between international, national and local practices, norms and values. 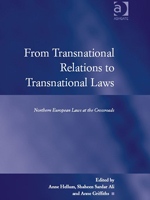 The book uses the concept "living law" to describe the multiplicity of norms manifest in transnational moral, social or economic practices that transgress the territorial and legal boundaries of the nation-state. Focusing on transnational legal encounters located in family life, diasporic religious institutions and media events in countries like Norway, Sweden, Britain and Scotland, it demonstrates the multiple challenges that accelerated mobility and increased cultural and normative diversity is posing for Northern European law. For in this part of the world, as elsewhere, national law is challenged by a mixture of expanding human rights obligations and unprecedented cultural and normative pluralism enhanced by expanding global communication and market relations. As a consequence, transnationalization of law appears to create homogeneity, fragmentation and ambiguity, expanding space for some actors while silencing others. Through the lens of a variety of important contemporary subjects, the authors thus engage with the nature of power and how it is accommodated, ignored or resisted by various actors when transnational practices encounter national and local law.