MarIus 513: The Petroleum Act - A Regulatory Regime in Development 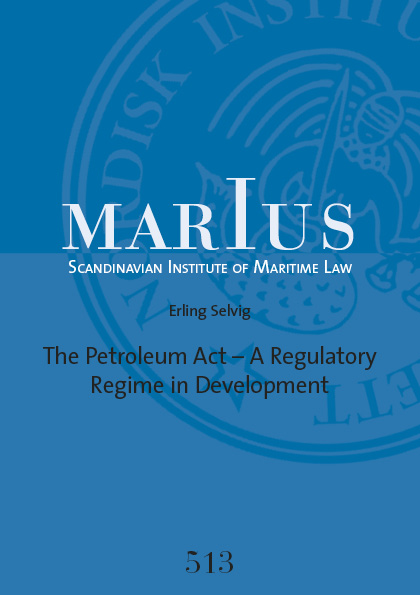 MarIus 513: The Petroleum Act - A Regulatory Regime in Development

The purpose of this study is to outline the main stages in the development of the regulatory regime for the Norwegian petroleum sector during a period of nearly 50 years as a basis for assessing its present and future roles.

The statutory basis for the regulatory regime is the petroleum act (1996) and the wide regulatory powers of the ministry of oil and energy (OED) therein contained. The objective is to ensure that the petroleum resources be exploited in accordance with the overall long-term interests of the Norwegian society and economy. Over the years, however, the regulatory regime has been in development, mainly to reflect the government’s responses to national and international developments important to the petroleum sector. Three distinct stages determine the structure of this study.

The regulatory regime dates back to the 1970-80s when the Norwegian part of the continental shelf suddenly became a new and attractive hunting ground for large international oil companies. During the first 25 years a comprehensive regulatory system developed, based on the principles of wide regulatory, discretionary powers for OED, firm governmental control of all activities, and direct state participation through Statoil equal to ca. 2/3 of the new industry. Nos. 1 to 9 of the study deal with this first period.

At the turn of the centuries, the picture was quite different. Due to changes in the Norwegian resource base, unrest in international oil and gas markets, and new trends in world trade the petroleum sector had become less attractive to the oil industry. In addition, Norway had just joined the EEA agreement and the internal market of EU. Responding to domestic and EU concerns, in 2001-2002 the government reorganized the Norwegian system for state participation in the petroleum sector, thereby cutting the existing legal and economic ties between the state and Statoil, and simultaneously also reorganized the Norwegian trade and transmission systems for gas export to EU. The effects for the regulatory regime and policies were far-reaching, constituting actually a clear break with key elements of the regulatory policies developed and pursued during the previous 25 years. The second part of the study (nos. 10 to 15) deals with these events.

During the recent 20 years, and in view of further structural changes in the international and national petroleum industry and the Norwegian resource base and on recurrently shifting oil and gas markets, Norwegian resource policy has focused mainly on maintaining the level of activities in the petroleum and offshore industries. One measure has been to diversify and broaden the mix of companies active in the petroleum sector by allowing also less resourceful international and national companies to participate in the petroleum sector, another to encourage exploration of available acreage consistent with current environmental and climate policies. These trends are the subject of the third part of the study (nos. 16 to 19).

This study has been prepared for inclusion in the introductory part of a new book “Oil and Gas Activities in Norway – Regulatory and Contractual Framework”, written by a group of petroleum lawyers for publishing by Gyldendal during the fall 2019. I sincerely appreciate that the authors and the publisher have agreed that the study now appears in advance in MarIus.