Launch of GQUAL! – A Global Campaign for Gender Parity in International Tribunals and Monitoring Bodies 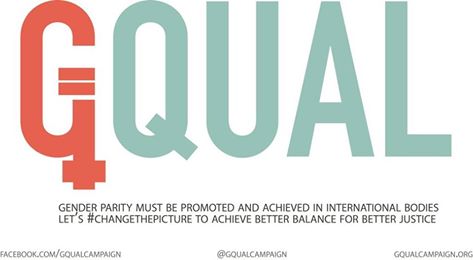 On September 17, 2015 GQUAL! was launched at the UN in New York. GQUAL aims to promote transparency and adoption of rules in the selection, nomination, evaluation, and election of candidates to international tribunals and monitoring bodies to promote gender parity, as well as to pursue research and monitor processes in order to identify best practices and standards. The GQUAL Declaration sets forth the road map to be followed and is open for signatures by academics, practitioners, researchers, policy makers, judges and political representatives (both male and female.)

This campaign arose from Viviana Krsticevic’s engagement as the Executive Director of the Center for Justice and International Law (CEJIL) and her concern that the majority of international tribunals and monitoring bodies are lacking gender parity among judges. Indeed, since its establishment, the ICJ has only had 3.8% women judges, the European Court of Human Rights 8.4% and the International Tribunal for the Law of the Sea 2.5%. The aim of this global campaign is to promote conditions, procedures, and mechanisms to ensure that out of 84 international bodies, which have 574 positions, 287 qualified women from different parts of the world and with diverse backgrounds are elected.

Claudia Martin notes that Article 8 of the CEDAW Convention requires states parties to “take all appropriate measures to ensure to women, on equal terms with men and without any discrimination, the opportunity to represent their Governments at the international level and to participate in the work of international organizations.”   In a paper published by GQUAL earlier this month, she argues that this calls for states to ensure gender parity when adopting appointment processing rules and to establish transparent selection processes.

I suggest that it is also important to consider Article 8 of the UN Charter which sets forth: “The United Nations shall place no restrictions on the eligibility of men and women to participate in any capacity and under conditions of equality in its principal and subsidiary organs.” As the ICJ is a principal organ, UN Member States should pursue transparency to ensure equal participation of women when nominating and electing judges to the court.

Kristicevic points out in a recent paper that “Candidates are nominated generally by their own nations. Voting is done at the international level and is generally a diplomatic process that often involves only a cursory review of the qualifications. Votes are frequently exchanges between countries. These exchanges may involve agreements to support preferred candidates in the same election, but might also involve future elections in the same body or concurrent elections in other bodies. Many of these agreements take place in secret, and the candidate most likely will not be involved in the decisions of trading votes.”

Hence, the GQUAL Declaration calls for:

That in every country, the Executive branch and Foreign Ministry publicly pledge to guarantee parity when presenting and voting for candidates for international tribunals and bodies, human rights bodies, Special Procedures, and diplomatic or other positions in regional and international organizations.

That those who feel compelled by our call for gender equality and parity support and promote the commitment presented in this declaration.”

The GQUAL! Declaration was signed by the Permanent Missions of Argentina, Costa Rica, Norway, Panama, and Sweden to the United Nations.

I suggest that this campaign indicates a need to review gender parity within national delegations to treaty making processes, as well as academia, and upper level national courts. As these are the pools of recruitment of judges, it is imperative to match international equal opportunity initiatives with national efforts.