UiO The Faculty of Law PluriCourts - Centre for the Study of the Legitimate Roles of the Judiciary in the Global Order
Main navigation
Back to uio.no
Sub navigation Menu
PluriCourts Blog > Ester Strømmen > Frontiers of International Environmental Law- Perspectives from the next generation of researchers
PluriCourts Blog 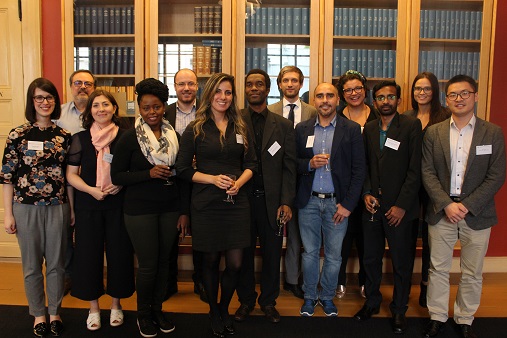 Presenters at the colloquium.

Rosa Manzo, the host for the conference, stressed the importance of the next generation of young researchers to set the agenda for upcoming legal research, and the colloquium was a wonderful chance for young researchers to present and share new developments in the field.

Panel 1 discussed State responsibility and environmental protection in terms of courts. The panel, featuring presentations by Kanza Syed (University of Auckland), Esmeralda Colombo (University of Bergen), Rosemary Mwanza (University of Eastern Finland) and Rafael Plaza (University of Chile), chaired by Professor Francesca Romanin from the University of Milan, presented various ways of furthering the environment by courts. The pros and cons of establishing an international environmental court in terms of the energy trilemma model were highlighted, as well as the possibility of the ICJ issuing an Advisory Opinion on the responsibilities of states under international law as pertaining to climate change. The potential for the ICC to have a role as a forum for environmental protection by potentially recognizing an environmental crime against humanity (ecocide) was presented by Rosemary Mwanza, sparking great interest and discussion from the audience.  The legal standing of nature, featuring examples from Bolivia, New Zealand and India -where rivers and mountains have been given legal rights- was also presented and highlighted in the session, asking whether a hypothetical international environmental court could be an effective guardian for Natures legal rights.

Session 2 on Environmental Governance included presentations by Danielle Denny (Universidade Catolica de Santos), Marcia Alvarenga (Universidade Catolica de Santos) and Manjeri Subin Sunder Raj (NLSIU), and was chaired by Professor Marjan Peeters from Maastricht University. This session discussed the shift from the fossil fuel economy, using Brazilian sugarcane ethanol as a case study, as well as eco-centric laws and the rights of nature, and even deep dove into space law- Marcia Alvarenga discussing the technical aspects and the environmental and legal consequences of space debris, encouraging the mapping and even collection of space debris by states.

Panel 3 on Evolving Interpretation of International Environmental Principles was chaired by Christian Prip from the Fridtjof Nansen Institutt, and featured presentations by Yu Long (Shanghai JiaoTong University), Dumisani Chirambo (Bradenburg University of Technology) and Froukje Platjouw (University of Oslo and NIVA). Environmental Impact Assessment (EIA) obligations, due diligence and non-discrimination were presented - and the balancing act between these was problematized and discussed. The creation of new international environmental principles through the transposition of multilateral environmental agreements was analyzed by way of intended nationally determined contributions (INDC’s), and ecosystem based governance was presented.

Session 4 on New frontiers in International Environmental Law within Law of the Sea was chaired by UiO’s own Professor Alla Pozdnakova, and featured presentations by Irina Stroia (University of Oslo) and Valentin Schatz (University of Trier). Irina Stroia presented the legal challenges of creating pelagic and benthic zones within marine protected areas, in order to improve the conservation and sustainability of future marine biodiversity. Valentin Schatz discussed due diligence obligations for fishing activities in foreign EEZs; his presentation filling the gap as to whether the burden of proof should be reversed when evidence is hard for coastal states to access, and whether coastal states’ inability/unwillingness to regulate their EEZ has an effect on flag state liability.

Lastly, panel 5 on Arbitration, trade and the environment, featured presentations by Katherine Quinn (University of Oslo) and Hirgen Bezhani (University of Oslo) and was chaired by Professor Hans Morten Haugen from VID Specialized University and Ole Kristian Fauchald from PluriCourts. International environmental laws legitimization and development through WTO insturments such as GATT and SPS was presented by Katherine Quinn, and ways of harnessing and broadening the usefulness of WTO law was presented in terms of two case studies: a particularly harmful pesticide for bees, and the scope of WTO instruments as pertaining to climate change.  Hirgen Bezhani, as the final presentation for the day, presented on non-discrimination in IEL, using a case study of Norwegian oil pollution to illustrate the need for equal access to justice for victims.

The conference concluded with Katherine Quinn and Marcia Alvarenga being awarded PluriCourts mugs for outstanding presentations. Many thanks to all of the wonderful participants for such an interesting and forward thinking day! 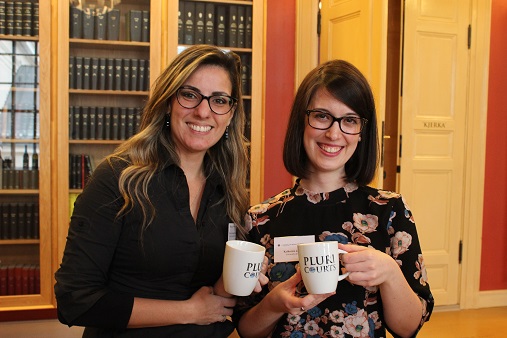 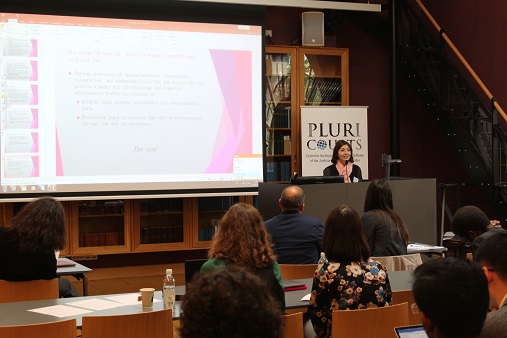