The Performance of International Courts 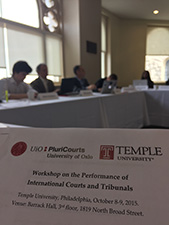 Variation in performance across issue areas

Some issue areas seemed quite unique and made comparisons of international courts’ performance challenging. For example, participants debated whether international criminal courts fit into the framework, as they deal with individual criminal responsibility, rather than international disputes. Evaluating international courts’ performance on environmental issues was also difficult, as there are no courts dedicated to the environment, but rather courts that receive some cases involving environmental issues and law (e.g. the International Court of Justice, International Tribunal for the Law of the Sea, etc.). Similar issues arise in the area of investment. Workshop participants debated whether there is an investment regime at all and considered how to manage the challenge of assessing performance in the context of decentralized investor-state arbitrations.

Challenges related to measurement and methods

Finally, the workshop held a discussion on empirical research on international courts, with a focus on the book’s chapter on measurement and methods (Theresa Squatrito). While the framework chapter systematically conceptualizes performance, operationalizing and measuring particular indicators can be challenging. Participants discussed the importance of conceptual clarity, as well as the use of mixed methods and data triangulation in empirical research on international courts. Even with these “best practices” in mind, participants recognized the difficulties with causal inference and attributing particular outcomes to international courts rather than other actors and phenomena. For example, with dispute settlement in the WTO, where states are encouraged to negotiate throughout proceedings, it is unclear to which extent the settlement of a dispute can be attributed to the Dispute Settlement Understanding or the negotiating parties. Causal inference was thought to be especially challenging at higher levels of analysis.