Investment Arbitration and its Discontents: An Empirical Assessment

The legitimacy crisis in international investment arbitration continues to generate attempts at systemic reform. The latest act is playing out in the theatre of UNCITRAL, which is wrestling with issues such as excessive costs, outcome bias, and lack of arbitral independence. Yet, not everyone is certain that there is a problem and some participating states have queried the critiques and their empirical basis.

So, what is the state of the evidence? Which critiques deserve serious consideration? These questions are challenging. The fragmented nature of the investor-state dispute settlement (ISDS) system and a traditional focus on doctrinal research has hindered systemic analysis. However, the rise of quantitative and qualitative research and new databases allows us to get a better grip on the evidence.

The ISDS Academic Forum working group (No. 7) has reviewed and assessed the available empirical research on the central concerns in the UNCITRAL reform process, which are also the subject of other Academic Forum working group reports. These concerns are: excessive costs, lengthy proceedings, inconsistency, incorrect decisions, arbitral diversity and arbitral independence.

For each issue, we asked two simple but difficult questions: (1) What do we know? and (2) Does it matter? To be sure, there is a recurrent tension in both questions. There is an epistemological challenge: some topics are under-studied or difficult to study. There is also an evaluative challenge. It is not always easy to assess whether a problem really matters – the magnitude of the concern might be unclear or the normative yardstick contested. 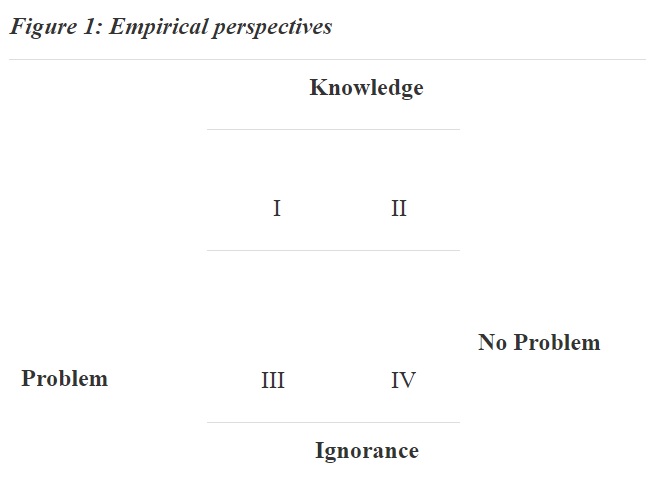 The legal costs and damages associated with ISDS have been consistently and frequently studied. Expenses relating to arbitrators and tribunals (‘tribunal fees’) average about 1 million USD, constituting a fraction of the costs that a party will experience in a typical ISDS case. The most significant legal costs are those of counsel (including experts costs). The average costs of counsel for claimants is around 6 million USD and for respondents 5 million USD. Yet, compared to international commercial arbitration or complex domestic court litigation, it is still unclear whether ISDS is uniquely expensive. A typical ISDS case can now can have thousands of pages of documentary evidence. Nonetheless, a process to simplify and improve case management may be beneficial, especially for states and small investors. Enhanced transparency on tribunals’ rationale for the calculation and allocation of costs is also highly desirable, given the lack of a consistent approach.

Losing states will almost always pay compensation (non-monetary damages are rare). The most recent study by Behn and Daza of all investment arbitration cases with known amounts awarded up through 1 February 2019 (193 cases) found an average award of 482.5 million USD, with a median of 31 million USD. Are these amounts excessive? While investors are only awarded a little over a third of what they claim on average, these awards can be significant for poorer states. The result is that while tribunal costs are more likely situated in Quadrant II (clear knowledge, not a major problem), higher counsel costs and compensation awards may be closer to Quadrant I (clear knowledge, a problem).

Recent studies on the duration of ISDS proceedings provide a fairly clear picture on the nature of duration and, increasingly, the causes of delay. The average period for both arbitration cases and ICSID annulments is relatively constant at 3.73 and 1.91 years respectively with a slight decrease in the past 5 years. But it is less clear whether there is a problem. The length of proceedings is much shorter than in many other international adjudicative proceedings. One study indicates that it is longer than comparable litigation in some developed state jurisdictions, but not in less developed states. Moreover, recent statistical research suggests that it is the parties themselves – especially states – that are largely responsible for longer proceedings, specifically through requests to bifurcate proceedings or arbitrator challenges. This raises the question of whether delay is (or should be) a major issue for the reform process, perhaps in Quadrant II.

Lack of consistency and coherence

Like doctrinal studies, empirical approaches paint a mixed picture of the consistency of decision-making in ISDS. The conclusions depend on the specific issues studied, the analytical framework, terminology and methodology used. Moreover, we should expect inconsistency for differently-worded treaties or factual situations.

Citation network analysis has provided one lens of the nature and degree of jurisprudential integration and thus consistency. For example, Stone Sweet and Grisel trace a dramatic shift in ISDS awards from citations to other international courts to a citation network of prior ISDS awards, suggesting the system is increasingly becoming internally consistent – although not necessarily externally consistent. Moreover, additional studies have found that ICSID and NAFTA tribunals refer to case law more frequently than non-ICSID cases, marking the limits of internal consistency.

Whether inconsistency is a problem depends on the importance one places on legal certainty. Quality decision-making, sociological legitimacy, and dynamic learning might be equally valued. The consistency concern may therefore fall between Quadrant I and II: some knowledge, partly problematic.

Making conclusions on incorrectness is challenging for empirical methods as much as it is for doctrinal methods. On one hand, some authors and actors dispute that the ISDS system is biased and point to the even-handedness in final outcomes: see figure 2. Strezhnev finds also that developing countries lose more frequently because they are more likely to settle otherwise successful cases.

On the other hand, some authors have found that the majority of arbitrators advanced a pro-investor jurisprudence and that developing countries are more likely to lose a case, even when controlling for most democratic governance indicators. Based on case studies, Sattorova also finds that ‘there is a significant current within the international arbitration community that favours the vision of investors as victims of corrupt governments.’ The results are thus mixed, pushing the issue into the ‘known unknowns’ of Quadrant III or IV. 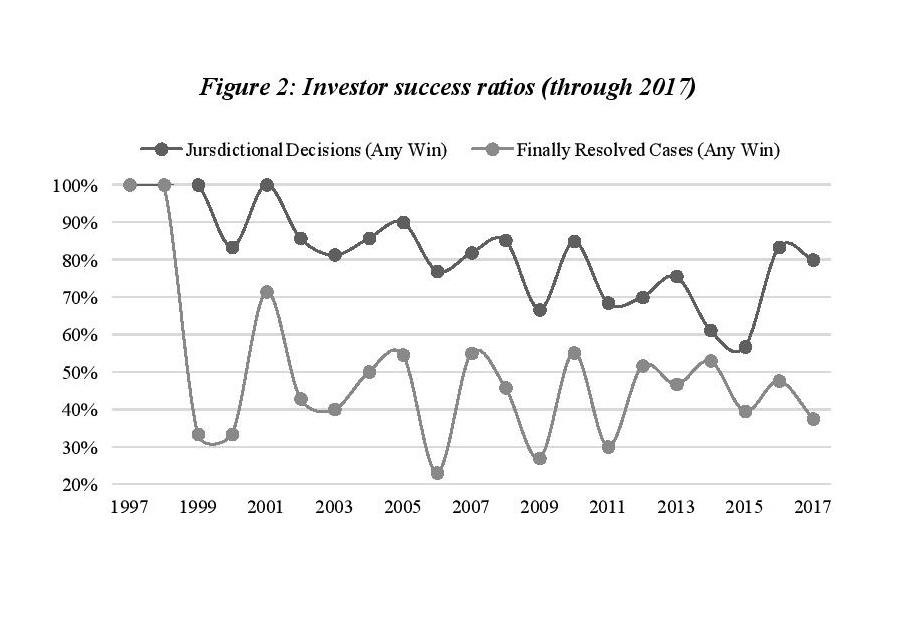 The evidence also indicates that change is sluggish across all aspects of diversity. The ‘prior experience’ norms dominates as parties have strong incentives to (re)appoint experienced arbitrators whose leanings are known. The result is a system that struggles with legitimacy and some studies suggest a more diverse group of arbitrators may partly decide differently. This issue clearly falls in Quadrant I.

Empirical research raises some real questions over the impartiality, neutrality and to some extent independence of arbitrators. A survey experiment conducted on about 250 international arbitrators demonstrates that arbitrators are more likely to choose outcomes favorable to the side appointing them. Moreover, a study on double hatting shows that up to 47% of cases (509 in total) involve at least one arbitrator simultaneously acting elsewhere as legal counsel in another ISDS case.

However, empirical work on independence must proceed with caution. It is frequently difficult to demonstrate with precision the causal effects of alleged bias. However, institutional behavior such as double-hatting and party-based appointment creates at least a perceived bias and legitimate concern, putting the issue between Quadrant I and III: some knowledge and a potential problem.

The survey of the empirical studies in relation to the six issue areas that the UNCITRAL Academic Forum has provided reports revealing an emerging base of evidence for assessing the ISDS process. In some cases, precise statistics can be given on the nature of the regime (legal costs, duration, diversity) and increasingly on the casual factors behind its outcomes (e.g. causes of delay, presence of bias effects on diversity on outcomes). However, the survey also indicates the limitations of an empirical perspective. The main challenges are access to all relevant data and modelling challenges in explaining outcomes. Moreover, evaluative challenges remain – it was not always clear whether there is a normatively or empirically relevant problem.

Nonetheless, in Figure 3 we have plotted our six conclusions on the epistemological and evaluative axes. In some instances, there is clear evidence of a problem (diversity, costs) or clear evidence that raises questions as to whether there is a significant problem (duration of proceedings). In other areas, we don’t know enough (inconsistency, independence, and incorrectness) although some evidence points toward a problem. 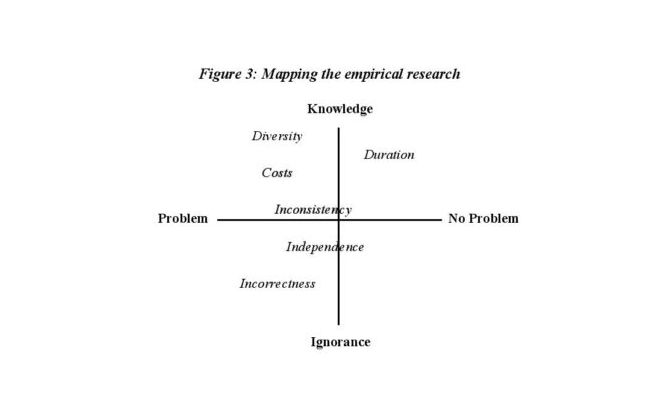