UiO The Faculty of Law PluriCourts - Centre for the Study of the Legitimate Roles of the Judiciary in the Global Order
Main navigation
Back to uio.no
Sub navigation Menu
News and events > News > 2015 > The Climate Negotiations Seen From the Inside: Will States Agree? 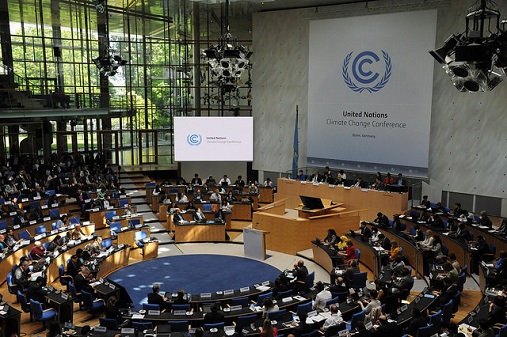 To date, the main legal text that has regulated states’ commitments in this matter is the Kyoto Protocol of 1997. This binding international treaty contains clear goals for cutting CO2 emissions. In 2012, states obliged themselves to develop a successor document by 2015. The climate conference in Paris in December 2015 is seen as the last possible date for reaching a new binding agreement on cutting emissions.

PhD candidate Rosa Manzo will attend the pre-negotiations for the climate conference this fall as an observer. During these working group meetings, the states prepare a legal text to be adopted in Paris. It can take the form of a protocol, another legal instrument or an agreed outcome with legal force. For Manzo, observing the negotiations is particularly valuable: “My doctoral research is tightly connected with the work of this body. As I am writing about the possibility to design equitable commitments, it makes me extremely enthusiastic to be part of this meeting. It will give an additional value to my doctoral thesis.”

A new agreement in a changed geopolitical and economic context

Since the Kyoto Protocol of 1997, many states have undergone important changes. Emerging markets become important players in the global economy. This industrialization has required enormous amounts of energy, which has often come from fossile sources such as carbon. Small island states, on the other hand, see the impact of climate change ever more directly: They lose more and more land to the ocean, and fear literally to drown.

The climate summits in the last years have focused on how to distribute the burden of climate protection measures. Under the Kyoto Protocol, developed countries had to cut emissions; developing countries should adapt their industries through aid from the West. Increasingly, newly industrialized and developing countries will have to actively take responsibility for reducing harmful emissions. An equally challenging task is to get large developed countries on board. The United States refused to be bound by the Kyoto Protocol, and Canada, Australia and some other states withdrew.

These debates are difficult and progress is slow.

“There is a unanimous view that there exists an urgent need to accelerate the work”, Manzo says. “Besides that, the progress achieved so far by the working group is a testament to the strong political will of all Parties to ensure that the working group can fulfil its tasks to prepare a binding legal text. It also shows states’ commitment to a universal climate agreement to be adopted in Paris.”

Manzo considers it as a positive signal that 49 states already have submitted declarations on how they themselves plan to cut CO2 emissions.

However, Manzo cautions against too much optimism: “We should be careful with our expectations for what reaching an agreement will mean. The main objective of the climate conference in December is to produce a cooperation framework among governments. If we expect a legally binding agreement of the same nature of European Convention on Human Rights, for sure we could be disappointed.”

According to the PhD candidate , the climate summit is more a starting point of a future process then an end solution to global warming. “More than looking for a legally binding agreement that will solve everything right now, we should evaluate how much countries are themselves are ready for to change towards a low-carbon economy.”

Ensuring respect for the new agreement

One of the topics under discussion is which consequences a violation of the agreement can have. Pure self-commitment has rarely proven to be sufficient to reach the goals set out in a common text. It is too tempting for states to sometimes, or permanently, fail to obey the treaty, making it in reality ineffective.

In fact, Manzo states that the value of the agreement will depend on the outcome of negotiations on a so-called compliance mechanism, a procedure to monitor how states implement the agreement. It is yet to be decided which form such a mechanism will take. “One of the greatest challenges will be to agree on who would trigger the compliance procedure/mechanism. The original purpose of the compliance mechanisms was to push states to comply with their own obligations.  In other words compliance mechanisms exercise external control over states’ behaviors.  Therefore, these bodies do not enjoy judicial power in the traditional meaning of the word. If states were allowed to trigger a procedure, a compliance mechanism could take the form of a judicial body. This could be a big step forward in the building of an environmental rule of law.”

Again, Manzo points out that what is required most is what we have least: Time. “In the best scenario, the Paris Agreement will provide a sketch of a compliance mechanism, which will be worked out in detail in later meetings. This happened with the Kyoto Compliance Mechanism that was sketched out in the Protocol of 1997 and its workings finalized under the Marrakesh Accords of 2001.”

More about this topic