UiO The Faculty of Law PluriCourts - Centre for the Study of the Legitimate Roles of the Judiciary in the Global Order
Main navigation
Back to uio.no
Sub navigation Menu
News and events > News > 2015 > Law Faculty Students win Prize at International Moot Court Competition 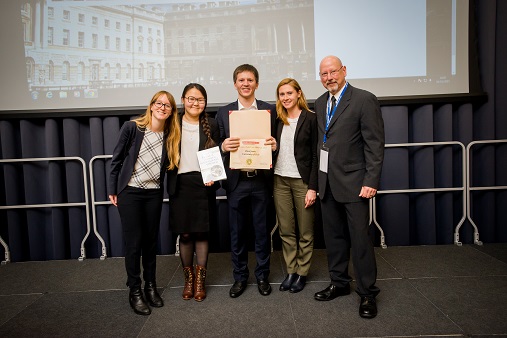 From October 29 to November 1 four students from the University of Oslo’s Law Faculty participated in the “Foreign Direct Investment Moot Competition” at King’s College in London. Roughly 60 teams from law faculties around the world participated in this international arbitration competition. The Norwegian team was sponsored by PluriCourts.

The competition focused on questions related to foreign direct investment (FDI) in solar energy in the EU, and thus used a real-world problem many countries have faced after the European debt crisis. For example, worsened economic conditions led a country like Spain to cancel its solar power financial incentives, which sparked lawsuits from investors under so-called investor-state dispute settlement.

The team from the University of Oslo consisted of three students from the LL.M. program in Public International Law, Liubov Barabanskaia (Russia), Monika Bernard (Poland), and Rinat Ziyodullaev (Uzbekistan), as well as one student from the Master of Law program, Anja Stensrud Elverum (Norway). Daniel Behn and Maksim Usynin, both from PluriCourts, acted as the team’s coaches.

The team won the prize for “Best Damages Aspect”, which was a special award for the best damages as arguments in a memorial. This means that the team’s arguments will be published in The Journal of Damages in Investment Arbitration.

The participants are very happy both with their efforts and the result, and stress that it has been highly exciting and instructive to participate in an international legal procedure competition.