Both joined PluriCourts this summer, as researchers in political philosophy and legal theory.

Johan's background includes work as a legal associate and as an advisor at the office of the Parliamentary Ombudsman. He received his Ph.D. in May 2020 from the Department of Public and International Law at the University of Oslo, specializing in the field of applied rights theory. His research has focused, in particular, on conflicts between rights, correlativity of rights and duties and the normative standing of legal liberties.

At PluriCourts he will be using applied rights theory – specifically 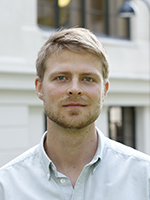 tools for categorising rights on the basis of their conceptual properties – in order to frame claims about the normative hierarchy of rights and graded legitimacy standards. He will also be examining the conceptual premises underlying how the legitimacy of adjudication is perceived. The goal is to understand, and maybe adjust, the sense of unpredictability that arises when International Courts are thought to adjudicate on the level of dynamic powers and immunities.

Matthias Brinkmann joins PluriCourts from the University of Virginia, where he worked as a postdoctoral fellow in the "Political Philosophy, Policy and Law" program. Previously, he completed a dissertation in philosophy at the University of Oxford in 2017. His research focuses on the normative grounds of political legitimacy and authority, and related topics such as individual rights, liberalism, and democracy. He has also published on topics in political epistemology.

At PluriCourts he will work on a book project tentatively titled "Tools for Justice: Legitimate Power without Consent, Authority, or Public Justification", which defends the view that political institutions are justified on their ability to promote justice. The book builds on previous research that has been published in journals such as Ratio Juris and Law and Philosophy.

Beyond the book, he is particularly interested in interdisciplinary topics at the intersection of philosophy, economics, politics, and law. In his free time, Matthias is an avid reader, computer game player, and servant to his cat.