It was with deep sadness that we received the message that Associate Professor Daniel F. Behn passed away in his sleep on 16 July 2022 in London at the far too early age of 47. 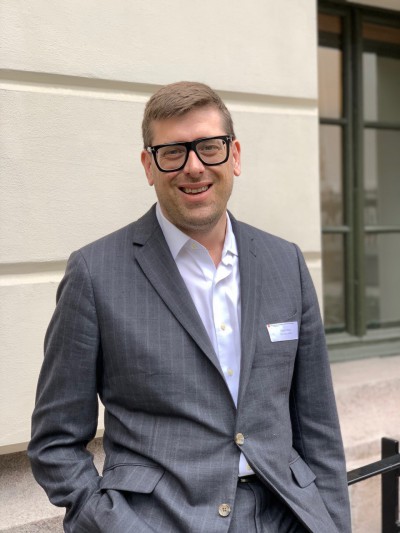 Warm, generous, collegial, and deeply analytical and knowledgeable, he has been a dear family member, friend, colleague, and scholarly leader in developing ground-breaking research on international investment law.

Daniel started his academic career at the University of Dundee, first with an LLM in international dispute settlement, and thereafter a PhD as the Ibrahim Shihata Fellow in international law. He was the last Ph.D fellow of Professor Thomas Wälde, who inspired Daniel to come to Dundee’s renowned postgraduate program in mineral and petroleum law. Daniel is remembered there for his charisma and engagement, often gathering like-minded classmates to discuss international law and arbitration – some attending just to hear him speak. His PhD, A Theory of Configurative Fairness for Evolving International Legal Orders, provides a foundational theory for understanding and measuring how subjective value perspectives affect the development of legal orders over time.

In the same year that he graduated, 2013, Daniel was recruited to a post-doctoral position at PluriCourts Centre for Excellence, University of Oslo. His formal qualifications were excellent, but even more important was his combination of theoretical curiosity and a profound need to ground theory in real life experiences, problem solving, and empirical validation. He also had an unmatched and impressive encyclopaedic ability to recall in detail cases, persons, and events in international economic law. This repeatedly became the departure point for engaging and extensive discussions at the intersections of law, political science and philosophy.

Daniel’s years at PluriCourts were many and busy. His project proposal was “Investment Treaty Arbitration through the Eyes of the Foreign Investor: An Empirical Look at Claimant Behavior and Motivation”, dated 27 June 2013. The purpose was “to look ‘behind the cases’ in investment treaty arbitration [and] … to gain empirical knowledge about the investor-claimant that is unlikely to be gained from the primary documents available to scholars.” Looking back, it is clear that Daniel was extremely successful in achieving what he set out to do, with a flurry of empirical projects using quantitative, qualitative, and computational methods and the facilitation of a large and diverse investment law research community based at PluriCourts. However, as happens to many projects, he was prevented from applying the particular approach he envisaged; and testing the theory and methodology on subjective values he developed in his PhD remained a project close to his heart that he worked on to the end.

Almost all Daniel’s publications are co-authored, reflecting his deep commitment to collegiality. He cherished every opportunity to work together with other academics, and his list of co-authors includes a broad range of PluriCourts researchers, former Dundee Ph.D fellows, and internationally renowned scholars. Two of his articles were awarded prestigious prizes, the European Society of International Law Young Scholar Award for the paper “Managing Backlash: The Evolving Investment Treaty Arbitrator” and the John H. Jackson Prize for the Best Article in the Journal of International Economic Law, “The Revolving Door in International Investment Arbitration”. These articles, amongst others, are now highly cited and have been re-published in reference works.

Besides publications, Daniel has had four key roles at PluriCourts. The first was to build a database on investment treaty arbitration, which has provided the basis for much of the empirical scholarship. The project took on a life on its own and has grown in many directions, with multiple database collaborators and use of machine learning methods. This was both a blessing and curse for Daniel when he left PluriCourts for a permanent position at Liverpool University in 2017. He gradually lost control over its content and design, which led him to continue using his excel spreadsheet that he trusted and mastered to perfection.

The second was leading the publication of an edited volume on the legitimacy of investment treaty arbitration. Daniel selected a group of the most important empirical scholars in the field who met in Oslo in 2015. This also became a long-term project, frequently interrupted by other new and pressing paper deadlines and initiatives. One of his last and cherished academic achievements was thus the publication of the edited volume in the spring of 2022: The Legitimacy of Investment Arbitration. Empirical Perspectives (Cambridge University Press), in which he is also the co-author of four chapters. It partners the other co-edited book Adjudicating Trade and Investment Disputes: Convergence or Divergence? (Cambridge University Press, 2020) and more than 40 other academic publications over a 15-year period.

The third was to apply for funding. Early in 2015, he took on the most challenging task available, to produce an EU Horizon 2020 project application. While this was time-consuming, complex, and ultimately unsuccessful, it provided the foundation for two of the externally-financed international investment law research projects we have at PluriCourts today, LEGINVEST and COPIID, which will be an important and enduring part of PluriCourts’ legacy and provide the ongoing basis for our investment law research community. Daniel also actively co-led other major research projects, including on arbitrator psychology with colleagues at Queen Mary University of London.

Daniel’s final role was public outreach and communication, which he approached with zeal. Besides co-writing numerous blogs for EJIL: Talk! and others and being interviewed in various media outlets, he was deeply involved in the ongoing UNCITRAL reform process on investment arbitration.  In 2018, he was approached to be a founding member of the Academic Forum on Investor-State Dispute Settlement, which was established to support governments and civil society in reform negotiations. He played an active role in developing and communicating research results, co-editing special issues, and building institutionally the forum. He was appointed the Deputy Chair (2019) and subsequently Co-Chair (2021).

Besides undertaking these roles, Daniel was also a passionate educator. At the University of Oslo, he used both Socratic and experiential methods to engage students in active learning in a variety of elective subjects. When he took up a position at Queen Mary University of London in 2019 he was given responsibility for the PhD program as Director of Graduate Studies, where he sought to follow up almost a hundred research fellows. Daniel spoke often of the joy of being engaged in helping others develop their careers. While the timing of Daniel’s arrival in London coincided partly with the outbreak of the pandemic and its accompanying isolation, Daniel is remembered for impressing his colleagues and students at Queen Mary with his exhaustive knowledge of international investment law, engaging personality and – above all – principled character.

Due to his avid curiosity and sharp mind, Daniel had also a taste of professional practice, representing a foreign investor in an investment treaty arbitration. His well-rounded knowledge of investor-state dispute settlement and empirical expertise contributed greatly to the design of the case strategy. He led the legal team and developed a close relationship with everyone involved in the case, including the client. This experience inspired a new set of ideas, questions, and reflections around the decision-making process in investment treaty arbitration, which would have undoubtedly resulted in a new research agenda for the coming years.

We will remember Daniel as a unique scholar who thrived and bloomed when working in close cooperation with others. The forced isolation during the pandemic thus hit him hard particularly, and is a reminder of the importance of caring for colleagues and friends. Daniel sparkled when faced with complex questions of data collection and testable hypotheses. He motivated and made others shine and helped make PluriCourts an exciting and fun workplace with his boisterous humour, warmth, and engagement. Daniel F. Behn will be deeply missed.