UiO The Faculty of Law PluriCourts - Centre for the Study of the Legitimate Roles of the Judiciary in the Global Order
Main navigation
Back to uio.no
Sub navigation Menu
Projects > Multirights > News > 2012 > New Book on UN Human Rights Treaty Bodies 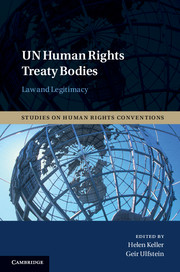 The effective implementation of human rights treaty obligations in national law is subject to increasing attention. The main responsibility for the monitoring of national implementation at the global level is entrusted to the UN human rights treaty bodies. These bodies are established by the respective human rights conventions and are composed of independent experts. This book examines these bodies from three perspectives: the legal aspects of their structure, functions and decisions; their effectiveness in ensuring respect for human rights obligations; and the legitimacy of these bodies and their decisions. Containing contributions from a variety of eminent legal experts, including present and former members of the treaty bodies, the analysis should be read in light of the ongoing effort to strengthen treaty bodies under the auspices of the UN High Commissioner for Human Rights and with the involvement of all relevant stakeholders.

A book launch was held on October 10 at the Law Faculty of the University of Oslo, with the participation of Prof. Mads Andenæs as commentator.