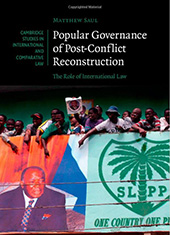 What has happened to international legal norms in the practice of popular governance in the aftermath of war? The central argument of the book Popular Governance of Post-Conflict Reconstruction by Matthew Saul (Cambridge University Press, 2014) is that the relevance of international law for popular governance in the aftermath of war will depend on how it balances two competing considerations: the need for flexibility, to allow actors with authority to tailor popular governance measures to suit the context, and the need for accountability, to motivate best practice and reduce the scope for the perception of and actual occurrence of an abuse of authority.

Even though much attention has been given to the question of how the population should be involved in decision-making on reconstruction, little attention has been given to this issue from an international legal perspective. With examples from two contrasting contexts (Sierra Leone and Afghanistan), Saul discusses these issues in the light of the recent trend of increased international involvement in post-conflict states and show how international law on popular governance has contributed in the post-war periods.

Under what conditions does a post-conflict government have authority? What challenges to its legitimacy does it face? To what standards can it be held accountable? Via case studies of Sierra Leone and Afghanistan and detailed accounts of extant international law, Matthew Saul explores the international legal framework which regulates popular governance of post-conflict reconstruction.

You can read more about the volume at the webpage of the publisher.