Read online or download report for 2017 prepared by the NCHR International Department. 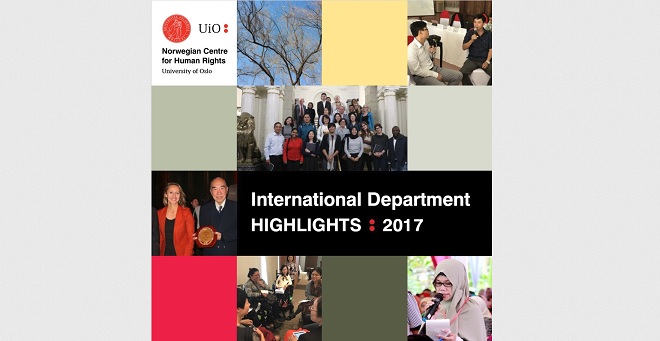 Human rights continued to be under pressure in many countries in 2017. Rule of law principles were challenged, not only in authoritarian states but also in democratic countries. Despite a demanding human rights climate in 2017, NCHR managed to carry out its activities largely as planned, and in some areas, our work expanded beyond anticipated.

The China programme was awarded the Honorary Dean Professor Li Buyun’s Law Prize in 2017 for its role in promoting human rights education, research and the rule of law in China. The normalisation of diplomatic relations contributed to the resumption of high level contact with Chinese universities and think tanks. NCHR’s 20th anniversary of academic cooperation in China was a welcome opportunity to gather old and new cooperating partners in China to celebrate and discuss past experiences and future opportunities for cooperation.

Efforts to promote global standards for non-coercive interviewing in law enforcement and security services gathered momentum in 2017. NCHR participated and facilitated participation from partner countries in various UN fora, both in Geneva and New York.

We are proud to be part of a global network of engaged academics and experts, who with their teaching and writing, lecturing and discussions actively contribute to keeping human rights up front. These efforts had not been possible without the support from the Norwegian Ministry of Foreign Affairs.

We are happy to present this Annual Report, highlighting some of the important results and activities carried out by the International Department at the NCHR and our invaluable partners in 2017.