The NCHR at British Islam Conference - A Marketplace for ideas

The event, organized by New Horizons in British Islam, provided a platform for conversation and exchange of knowledge and practices towards reform of Islamic thought. 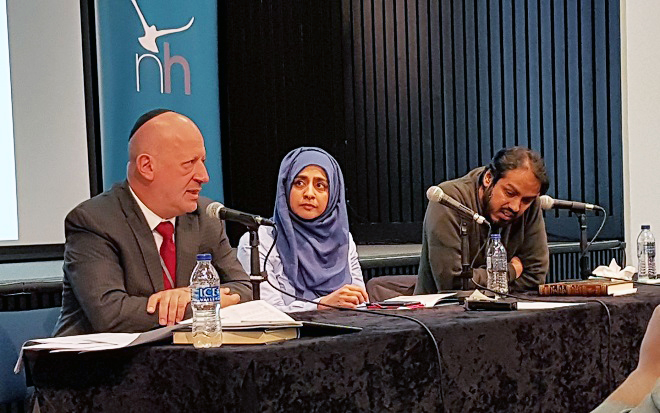 Rashad Ali (from right) talking about the role of reason in theology, and Edwin Shuker presenting a model for improving relations between Jews and Muslims during a panel discussing. (Photo: UiO/Lena Larsen)

Lena Larsen, NCHR representative and head of the Oslo Coalition on Freedom of Religion or Belief, held a presentation on "Freedom of Religion and Expression in Islam: Introductory Notes on Blasphemy and Apostasy" during the event, which took place 24-25th February.

Nearly 60 speakers covered a diverse range of subjects in their presentations, including: Islamophobia, interfaith marriage and child sexual exploitation.

More than two hundred participants from academia, NGOs, practitioners and others participated in the discussions following the presentations, which had a large thematic range and addressed a number of pressing issues.

The conference philosophy is based on, and further developed the ideas behind the Oslo Coalitions initiative "New directions in Islamic thought (NDIT)". Dilwar Hussein, leader of New Horizons in British Islam used his participation in the Oslo-based NDIT Workshop as inspiration for the concept of the conference.