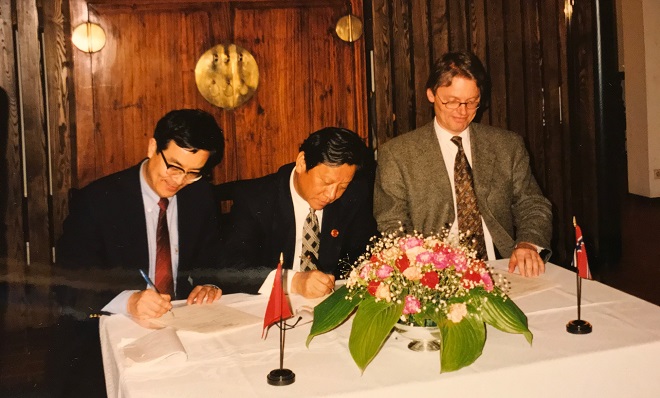 6. May 1998 Nils A. Butenschøn, professor and head of the IMR (now NCHR) signing the first academic cooperation agreement Chinese universities.

The China Programme was founded in 1997, as the first country programme at the Norwegian Centre for Human Rights (NCHR). The Programme was established as an academic complement to Sino-Norwegian Human Rights Dialogue and has played a key role in building Norwegian competence on human rights in China. For 20 years, the NCHR has promoted international human rights law standards in China through education and research projects in cooperation with Chinese partner institutions. Download anniversary report (pdf).

NCHR at the University of Oslo is based on a multi-disciplinary commitment and supports activities which promote the development, understanding and application of international human rights standards. Long-term involvement and close collaboration with Chinese academic partners has been the cornerstone of our work, says Cecilie Figenschou Bakke, who has been Director of the China Programme since 2006.

Below are some of the key result of the NCHR's engagement with Chinese academic partners.

The NCHR has engaged in dialogue and supported several projects on access to justice and strengthening of human rights knowledge among legal professionals working in the area of criminal justice.

In order to strengthen the awareness of equality and non-discrimination, the NCHR contributes to ongoing legal reform processes, and supports initiatives to implement existing legislation. In China, NCHR cooperation has focused on discrimination in employment, minority rights, women’s rights, sexual minorities, and the rights of persons with disabilities.

The NCHR offers an important academic base for studies and discussions concerning Human Rights and Business through master courses, academic research groups, publications and seminars.

Access to information about the United Nations' processes helps enrich domestic debates on state obligations and how human rights can be implemented. The NCHR has provided opportunities for academic partners to learn more about regional and multilateral processes vital to the protection of human rights.