The Real Impact of Natural Resources Corruption on Human Rights 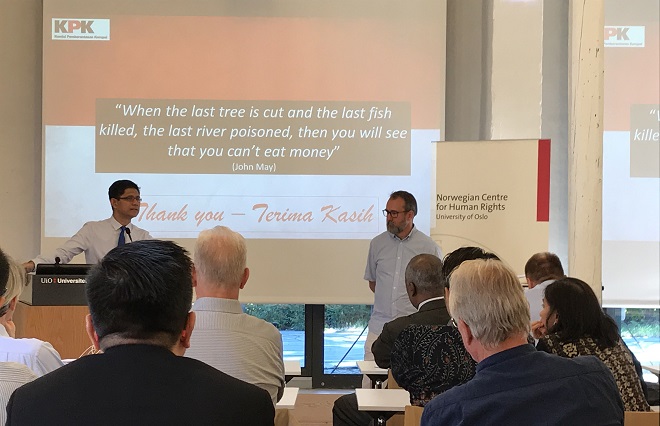 During his talk, titled “The Real Impact of Natural Resources Corruption on Human Rights” Dr. Laode gave a rather gloomy picture of the state of affairs in Indonesia’s resource extracting industries. In the mining sector many companies operate without any licence, most of those who hold licences do not report on their activities, even less fulfil their obligation to pay post-mining rehabilitation fees. In terms of contributing to state revenues most companies do not pay any taxes, and a majority of companies do not even have a tax file number, others operate in protected areas such as national parks. Un-collected non-tax revenue in the mining sector amounts to billions of dollars.

Dr. Laode also pointed to how corruption contributes to increase the gap between the rich and the poor in Indonesia. In spite of the negatives, the KPK has been able to bring several high profile corruption cases to court and these cases have led to convictions. As an example, three governors of the resource rich province of Riau on Sumatera, one after the other, have been sentenced to between four and 14 years in prison and been ordered to pay large fines. In addition, prominent business persons, and politicians, including members of parliament have been convicted for corruption.

Dr. Laode highlighted the importance of conducting anti-corruption work through several channels, not only through prosecutions, but to also put efforts into preventive work, monitoring, working for increased transparency and produce good data through the commissioning of studies.

A particular challenge that was brought forward at the seminar is the enormous costs related to running for political offices in Indonesia. When newly elected bupatis (district heads), governors or MPs takes office, they will have amassed considerable debt - and when pay-back time comes, licenses and access to natural resources tend to be generously dispensed.

The seminar was co-organised by NCHR and the Indonesian Embassy in Oslo as a side event in conjunction with the Oslo Tropical Forest Forum 2018, June 27-28. The seminar drew a full house with about 70 people attending, including Indonesia’s ambassador to Norway Dr. Todong Mulia Lubis, and Norway’s ambassador to Indonesia Mr. Vegard Kaale.

Tags: Indonesia, Corruption and Human Rights By Knut D. Asplund
E-mail this page
UiO > The Faculty of Law >
Norwegian Centre for Human Rights > About the Centre >