The NCHR and the East Lake Institute for Social Advancement (EISA) is organising a 5 week training series on disability, sexual orientation and gender identities (SOGI) for representatives from Asian disability organisations. Last week, activist Ingrid Thunem shared her experiences from working with disability and SOGI rights issues in Norway with the participants. 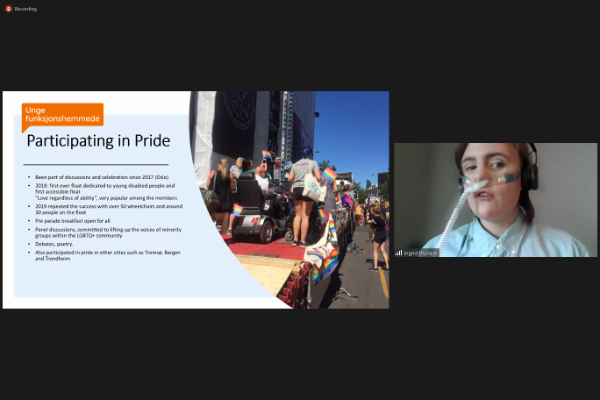 Activist Ingrid Thunem talking to the participants about Pride for disabled queer people.

The UN Convention on the Rights of Persons with Disabilities (CRPD) was ratified by Norway in 2013, but it has not been incorporated into Norwegian law yet. Norway is often criticised for focusing too much on a medical approach to disability instead of fully adopting the equality rights approach that the CRPD promotes. As a result of this, many Norwegian disabled people feel like second-class citizens whose rights are acknowledged but not yet fully respected according to Thunem. Research shows that 1 of 3 Norwegians with disabilities have experienced hate speech, 60 % report poor quality of life and 80 % of Norwegian schools are inaccessible.

Important protection laws on marriage equality, anti-discrimination and hate speech are in place in Norway and there is a growing general acceptance towards gay rights issues. At the same time hate speech and hate crimes against queer people is a recurring problem. It can still be very difficult to be openly queer in the countryside, trans medical care is still inadequate many places and there is also a growing anti-gender sentiment among some groups in the Norwegian society.

How is the situation for people who are both disabled and queer in Norway? According to Thunem the 2012 research report “Invisible and crystal clear: Being a lesbian, homosexual, bisexual or transgender person with a disability” highlighted how this group encounters both prejudice and ignorance in the Norwegian health care system.

Many Norwegian queer people with disabilities have reported negative attention, bullying and discrimination and 40 % of the openly gay disabled people in Norway say that they have experienced hateful comments. Thunem explained how sex and sexuality of disabled people has often been ignored or overlooked, and as a result disabled people in Norway were often treated as asexual by families, educators or health care providers. Without even being acknowledged as sexual beings, it has been extremely difficult for queer disabled people to be open about their different SOGIs.

Thunem also told the participants that many queer disabled people in Norway have felt that they were neither accepted in the queer community nor in the disability community. This has changed over time however, much due to the work of some of the disability and SOGI youth NGO’s of Norway working towards more inclusion within their own organisations and raising the awareness of sex and sexuality of disabled people in general.

Raising awareness about disability and SOGI

The Norwegian Association of Youth with Disabilities (NAYD) is an umbrella organisation for 38 organisations and 25 000 members aged 12 - 36. Thunem gave an introduction to how she and her colleagues in NAYD have tried to increase the visibility of disability and sexuality in media, in policy documents, among member organisations and among individual members. They have also cooperated directly with SOGI organisations on these issues.

NAYD has for example  made a free e-learning tool for teachers, health practitioners and others called “Sex that works” in order to help demystify sex and disability. They also organised a photo exhibition of intimate portraits showing that disabled people are sexual beings with the same desires as others. The NAYD report “Young, gay and disabled” (2017) described what Norwegian health services can do to better reach those who are double minorities and the report also included a recommendation for inclusive sexual health education from a younger age. NAYD has also made a guide for health practitioners and young people about assistive technology showing how this can improve the sex lives of people with disabilities.

The aim of the 5-week course on disability and SOGI is to enhance the understanding of these issues and to facilitate exchange among Asian disability NGOs. Although the situation for many NGOs in Asia is very different from that of Norway, it is still very useful to exchange ideas and experiences across borders on how to work on these issues. Talking about disability and SOGI issues is more taboo in some Asian countries than others and in some places it is even forbidden, but it is important to recognise that Norway also still has a long way to go before ensuring equal rights for this group. Continuing to try to raise awareness about these issues is therefore important everywhere!

More information about Equality and Non-discrimination work at the NCHR

More information about the training series on disability and SOGI