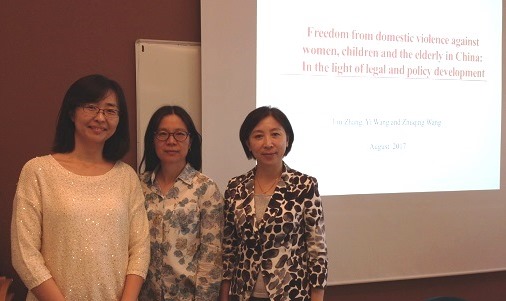 The seminar was co-chaired by Liu Zhang, Senior Analyst at the Child Welfare Research Centre, the China Philanthropy Research Institute of Beijing Normal University, Yi Wang, Head of Human Rights Education at the NCHR's International Department, and Zhuqing Wang, Associate Professor and expert on the protection of the elderly from the University of Science and Technology in Beijing. (Photo: Susanne Flølo/UiO)

The new anti-domestic violence law offers protection against physical and psychological violence of both family and cohabiting non-family members. It allows not only the victim but also close relatives and organisations to report the abuse and file a case. The law has also introduced one of the most important protective mechanisms, namely the personal restraining order.

While the law definitely marks a milestone in combating domestic violence in China, some major challenges remain, like the protection against former partners, sexual or economic abuse, and ways to effectively implement the law.