Together with the East Lake Institute for Social Advancement (EISA), the NCHR is organising a 5 week digital training workshop series on intersectional discrimination for Asian Civil Society. Particular focus will be on discrimination of people with disabilities and issues surrounding sexual orientation and gender identities (SOGI). 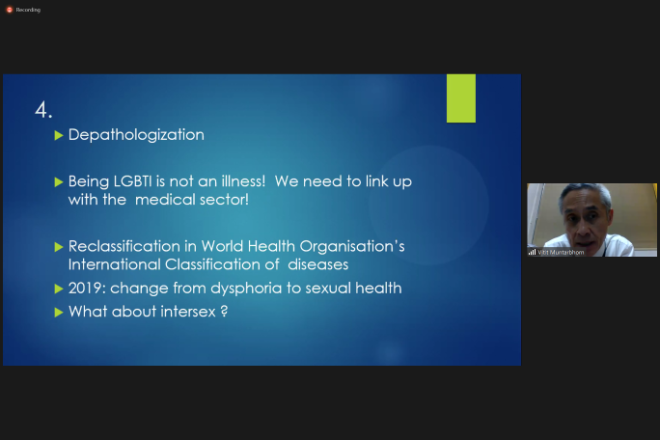 Lecturer: Former UN Independent Expert on protection against violence and discrimination based on sexual orientation and gender identity, Vitit Muntarbhorn

During the training sessions, participants will explore the intersectionality of human rights, double discrimination faced by people with multiple identities like disability and SOGI, best practice used by different groups in focusing on these issues and strategies for collaborative efforts.

The importance of intersectionality

Katherine Zappone opened the workshop series last week and shared experiences from her work as campaigner for the Yes campaign in Ireland's Marriage Equality referendum. Zappone talked about intersectionality and she advocated the need to include empathy for others when considering discrimination. To illustrate this, she gave an example of how her own understanding of intellectual disability and sexuality had evolved as she had come to understand the group better.

Many of the participants were inspired by Zappone’s account of her involvement in the Yes campaign and in particular by her account of how the referendum had direct bearings on her personal life. Katherine Zappone became Ireland's first openly gay government Minister when she was appointed as Minister for Children and Youth Affairs 2016-2020.

Everyone has a sexual orientation and a gender identity

In this week’s workshop, Vitit Muntarbhorn, Professor Emeritus from Chulalongkorn University Thailand, talked about how to understand SOGI issues under the human rights framework.

Muntarbhorn talked about some of the challenges that disability groups and SOGI groups face in Asia, and he urged the participants to be creative when working on these issues!

The training workshop series target Asian civil society representatives working on disability issues and the aim is to enhance human rights awareness, to strengthen the capacity to carry out disability and SOGI advocacy and to facilitate Inter-Asia exchange and networking on these issues.