Strengthening the capacity of lawyers to protect religious minorities 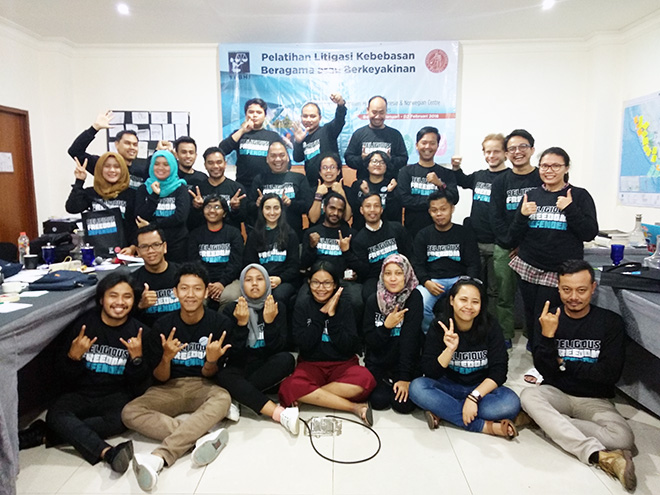 Participants after the training - ready and prepared to defend freedom of religion or belief. (Photo: April Pattiselanno Putri)

The second day focused on violations of the right to freedom of religion or belief, including how this affected victims and how to encourage support for victims. Representatives from three religious minority groups that had suffered attacks, discrimination and/or criminalisation: (ex-) Gafatar members, Ahmadiyahs and member of the Yasmin Church congregation paid a visit during the session.

How to conduct ‘litigation for freedom of religion or belief’ was the main theme of the third day. Participants discussed issues such as strategic litigation, evidence and court mechanisms followed by sessions on social analysis as well as lobby and negotiation. Such a broad perspective is necessary, as lawyers representing religious minorities in Indonesia not only do so in court. In practice, they also have to negotiate with the police, convey legal principles to the media in a language people understand, and relate to a range of other stakeholders.

On the fourth day, topics included ‘investigation and documentation’, ‘national mechanisms’ (such as the national human rights commission, ombudsman, child protection agency, witness protection unit and many more), ‘accompanying victims of violations in the field’ and ‘building arguments and strategy for advocacy’.

The training concluded with a moot court, dealing with four cases from the Indonesian national context.

The training was jointly organised by YLBHI (The Indonesian Legal Aid Foundation) and NCHR. Participants were lawyers with experience in representing religious minority groups. Most came from Legal Aid offices from across Indonesia, others from organizations affiliated with specific religious groups.