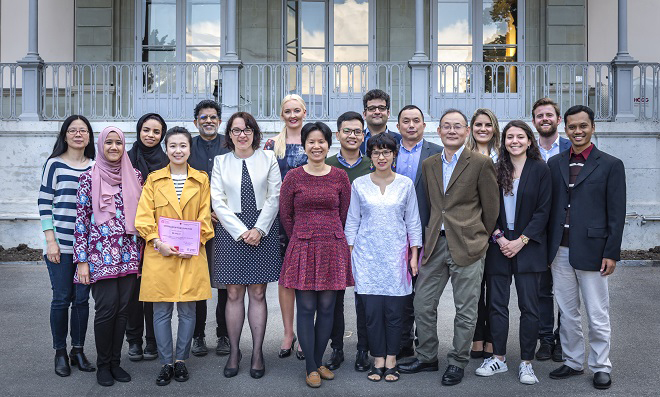 Participants and organizers in front of the Geneva Academy where the training was hosted (Photo: Olivier Chamard)

Insights into the work of UN Human Rights Mechanisms

The training, which was co-organized by the NCHR and the Geneva Academy of International Humanitarian Law and Human Rights aims at building a rare, practitioner’s insight into the functioning of UN human rights institutions. Covering topics ranging from the mechanics of treaty bodies and universal periodic review (UPR) to the political dynamics that fuel the mechanisms, the participants engaged in lively discussions with prominent experts and practitioner from the Office of the High Commissioner of Human Rights, NGOs, as well as diplomats.

Leading Experts and the role of Academics

The training was designed to complement both theory and practice with the participation and guidance of leading UN human rights mechanisms’ experts. Kamelia Kemileva, Executive Manager of the Geneva Academy, lead the first introduction and discussion on the UN human rights mechanisms system. Eric Tistounet, chief of the Human Rights Council Branch at the OHCHR, explored the work of the Human Rights Council and the role of its resolutions and decisions. Patrick Mutzenberg, director of the Centre for Civil and Political Rights, lead a practical exercise on shadow reports.

Miloon Kothari, President of UPR Info and former special rapporteur on Adequate Housing, discussed with the participants the UPR and their role as activists and academics during State’s review process. Nuno Cabral, diplomat from the Permanent Mission of Portugal raised the question on the politics behind human rights in the UN system. Finally, Nahla Haidar, member of the Committee on the Elimination of Discrimination against Women, held a lecture and accompanied the participants during the entire week engaging in the discussions and providing a gender perspective into the debate.

The experts highlighted the importance of the academia and the vital role they play in countries where there is limited space for civil society, or to supply treaty bodies and independent experts with priceless insight on fundamental issues for their work.

The theoretical aspects of the training were complemented with the attendance to Argentina’s review on the Committee on the Rights of the Child, and Cuba’s Universal Periodic Review session at the Palais the Nations. This was a great opportunity to experience the work of these mechanisms. Finally, the participants engaged in practical exercises involving writing UPR recommendations and following up the steps to become a special rapporteur or a treaty body member.

This training is part of a series that the International Department of the Norwegian Centre for Human Rights (NCHR) has prepared for the period of 2017-2019. The Programme seeks to increase the institutional capacity of local academics as well as to facilitate their engagement with the UN human rights mechanisms, both in terms of implementation and follow-up. The forthcoming 2019 training will focus on the UPR hearings of Iran and Vietnam.