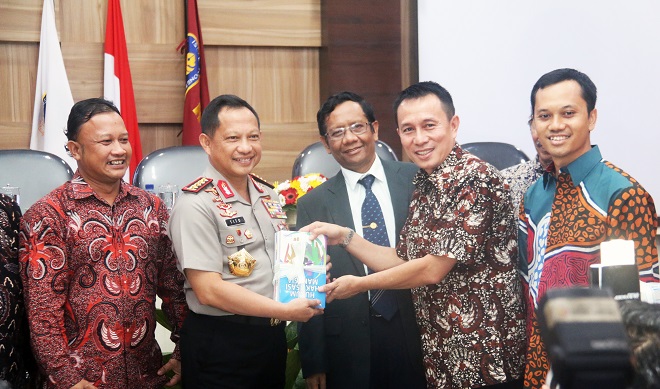 In 2008, Pusham UII and NCHR published the book Hukum Hak Asasi Manusia (Human Rights Law), a textbook designed for undergraduate students. This book has become part of the curriculum at dozens of law faculties across Indonesia but needed to be updated to account for recent developments over the last ten years (Download the book from Pusham UII’s website).

Marzuki is the former head of Pusham UII and former head of Indonesia’s Judicial Commission, a body that was established as part of Indonesia democratic reform efforts to monitor the performance of judges. His books are titled Etika dan Kode Etik Profesi Hukum (ethics and the ethical code for legal practitioners) and Hukum Hak Asasi Manusia (human rights law).

The book launches took place at a seminar on 'Realities and Challenges for Constitutional Human Rights in years of political campaigning'. The opening speech was given by Indonesia’s National Police Chief Tito Kurniawan, who spoke about democratic challenges related to identity politics, class divide and negative campaigning.

NCHR and Pusham UII have over the years cooperated on a range of activities related to human right education, including on training human rights lecturers, curriculum development and the training of judges. However, the book by Eko Riyadi and Pusham UII was produced and published without any involvement from NCHR - either financial or substantial, indicating that the past cooperation has generated sustainable results.