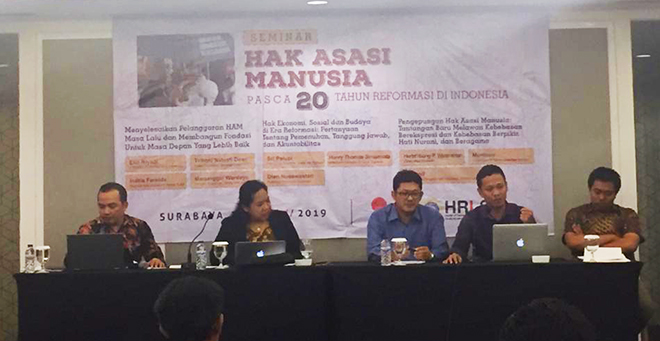 The seminar was organised in cooperation with the Centre for Human Rights studies at Airlangga University. The event had three panels and the presentations were responded to by discussants from the human rights education network SEPAHAM.

The Keynote speech was delivered by a representative of the Norwegian Embassy in Jakarta. The event attracted approximately 60 participants, as many as the venue could hold.

With presidential and parliamentary elections approaching, it was asked why accountability for past violations is not higher on the political agenda. The incumbent has strong links to military figures allegedly responsible for human rights violations under the New Order Regime and in its aftermath, whereas the challenger himself is widely believed to have been directly responsible for kidnappings and disappearing of student protesters.

The first panel provided an overview of various initiatives to deal with the past. According to the panelists, impunity for past crimes keeps maintaining a violent heritage that affects society today. Some positive developments were also mentioned, such as reconciliation efforts in Aceh. The speakers of this panel were Indria Fernida (AJAR), Eko Riyadi (Pusham UII), Trihoni Nalesti Dewi (Soegijapranata University). The discussant was Manunggal Wardaya (Soedirman University).

Economic, Social and Cultural Rights in the Reform Era - Fulfillment, Responsibility and Accountability

Panel two discussed developments with regards to Economic, Social and Cultural Rights. Sri Palupi (Ecosoc Institute) presented a range of disturbing statistics. For example, according to Riskesdas, in 2018 30,8% of children under five years of age had reduced growth as a result of undernourishment. A staggering 48,9% of pregnant women in 2018 suffered from anaemia, according to the government's own statistics. She strongly criticised selective use of statistics and indicators, such as the very low poverty line used for Jakarta.

While the normative framework for economic, social and cultural rights has long been in place, Palupi's conclusion was that the level of fulfilment and accountability was far from satisfactory. Henry Thomas Simarmata (University of Atma Jaya Yogyakarta) discussed the human rights jurisprudence of the Indonesian Constitutional Court. He himself has functioned as an expert witness before the court, who has paid attention to economic, social and cultural rights in various court decisions. Dian Noeswantari (Surabaya University) responded to the presentations.

Human Rights Under Siege: New Challenges to the Freedom of Thought, Conscience and Religion

Panel three discussed challenges to freedom of thought, conscience and religion. Some of the issues of concern included recent raids on perceivably left-wing literature, censorship at university campuses (often imposed by university leadership, partly due to outside pressure), harassment of human rights defenders, and the role of the military in political affairs. The presentations were held by Muktiono (Brawijaya University) and Herlambang P. Wiratraman (Airlangga University), and responded to by Manunggal Wardaya and Al Hanif (University of Jember).