Former Executive Director of Amnesty International Turkey, Idil Eser, is currently a guest researcher at the Norwegian Centre for Human Rights - and on trial in Turkey. 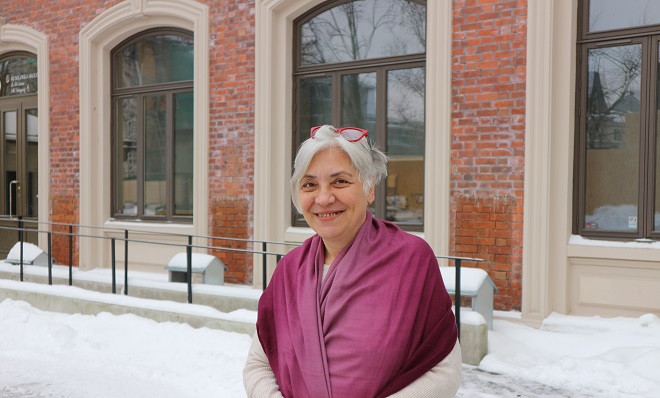 In July 2017 Idil Eser was arrested and detained by Turkish authorities in a hotel in Büyükada, Istanbul along with seven other human rights defenders and two trainers. The group was at the time taking part in a digital security and information management workshop, and were not given any reason for their arrest.

Idil Eser arrived in Oslo, Norway in October 2018 and is now a guest researcher at NCHR, under the auspice of Amnesty International.

I decided to continue to work on human rights; however, I wanted to do it in a different capacity. I needed a safe place to work and some time to think and reflect on what I wanted to do.

She is currently doing research on the rights of prisoners and writing memoirs from her own incarceration.

- I had seen a documentary about the Norwegian prison system and I realised it was one of the most liberal in Western Europe. My stay in prison opened my eyes to the needs of prisoners so I decided to do research on it along other projects and that is how I ended up here, says Eser.

Eser explains that she will focus on how the prisoners’ rights were restricted in Turkey following the coup attempt in 2016, the impact of the emergency law, and what lessons could be taken from the Norwegian prison system.

I do not think anyone would use my recommendations at this stage, but I think it’s a good exercise because I do not think the system in Turkey is humane or works for the rehabilitation of anyone in prison.

How would describe the human rights situation in Turkey right now?

- Democracy and the legal system has always had problems, but it is the worst I have seen in my lifetime. During the military coup of 1980’s we also had a very bad period in terms of democracy and human rights, but aside from the widespread systemic torture and disappearances of that period, I think this period is worse.

On trial in Turkey

There is a full scale attack on Human rights in Turkey and anyone I know who works as a human rights defender in one capacity or another has either lost their job or been arrested/detained. They either are in prison, on trial or sentenced. I am still on trial by the way, she adds.

Eser is not too optimistic about her own chances in court.

What measures would need to be taken in order to improve the situation in Turkey?

- We would need a good opposition first of all - a political party with a vision who promises to work within the rule of law. Without it I do not think we will see any positive change any time soon.

She expects the situation in Turkey to deteriorate in the near future.

- The pressure will increase because we are also experiencing economic hardship. I think that after the local election inflation and every economic indicator will worsen which will cause some sort of resentment in the public, but I do not know if this could be channelled into an opposition.

What does your future as a human rights defender look like?

- I do not know. I think I want to work more on the policy side. Apart from working on my memoir from the detention days, and the article on prisoners’ rights I also have two more ideas about what I would like to write about, which will be more academic in nature.

Prison taught me that you can have plans but life intervenes, so we will see. I do not have any concrete plans at this stage.

The UN High Commissioner for Human Rights, among many others are reporting on a global backlash against human rights. How do you think this trend could be reversed?

- I think international and national organisations, working on human rights, environmental causes, all rights issues should reconsider their organisation and administration philosophy and campaigning methods. They should work harder to become organised among people, to create communities of rights defenders. We need higher number of 'average Joes' in our ranks, so to speak.

- We have to create a vision for a world that respects the rights of every citizen and every living being, as climate change is also causing a lot of problems in terms of human rights. If the political parties are not creating this vision I think perhaps international organisations can come together and encourage people to work towards a common goal.

I would suggest to anyone who is interested in defending human rights that resilience is important. Humankind tends to think in terms of short term solutions, but we have problems needing long-term solutions. We as people can pressure our governments - and if it does not work in one country, collaboration and solidarity with other countries and people helps. Every country tend to think that they are unique and that their problems are unique, but that is not exactly true, is it?

She also adds that protecting the freedom of the media is key to a positive human rights development.

- Without the media, you cannot reach the people. It is also important not to polarize people who do not think like you. I see that in many countries, people are divided into two groups and they are not exactly engaging in constructive dialogue. I can understand the temptation, but it is not productive and we have to get out of this mess together. We need to find new arguments persuading each other to work towards a sustainable society where the rule of law, the rights of every human being without discrimination, and the environment is respected and taken care of.