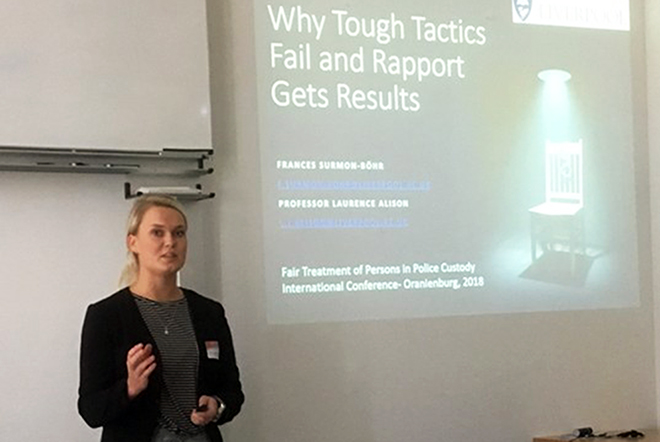 At the conference, NCHR affiliated researcher Dr. Asbjørn Rachlew and Frances Surmon-Böhr from the University of Liverpool, UK led a workshop specifically dedicated to Investigative interviewing and human rights. At this well-attended workshop, Surmon-Böhr presented research that the University of Liverpool has conducted where several hundred interviews with terror suspects were analysed.

Learning from best – and worst practices

A video showing use of “the harsh approach” towards a detainee by British soldiers in Basra, Iraq was aired, as well as audio recordings of reconstructed interviews of uncooperative suspects.

Whereas the use of aggression and humiliation during the interview, not unexpectedly, was proven to be futile, rather small nuances distinguished successful interviews from those that did not return any “yield” (Information with evidential significance or of intelligence value).

The research found that the most important variable distinguishing a successful interview from the unproductive ones was the interviewer’s ability to establish rapport (a connection) with the interviewee. Hence, the research team in Liverpool have developed a rapport based interviewing strategy emphasising adaptive interviewing behaviour.

The interviewee’s conduct are categorised along different dimensions of interpersonal behaviour: dominance/submissiveness and conflict seeking/cooperative. These different modes of behaviour may require the interviewer to adapt different interviewing strategies. A terrorist leader and an interrogation officer may indeed share personality traits that increases the likelihood of them going “butthead-to-butthead”. This is of course not conducive when the goal is making the flow of information optimal.

Sometimes the interviewer has to have the confidence also to appear as submissive during an interview. Nevertheless, Surmon-Böhr underlined that what she recommended was not a “soft approach”. The interviewer should be professional and respectful, not pretend to be the suspect’s friend or show affection.