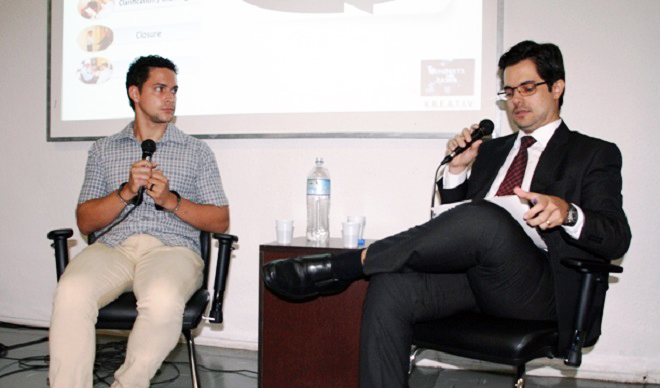 Practice make perfect: “Suspect” and PhD student William Weber Cecconello at the Pontifical Catholic University of Rio Grande do Sul (left) is being interviewed by Sthéfano Altino Baptista Rabecini, Police officer in the municipality of Presidente Venceslau in the state of São Paulo.

In Brazil 60,000 people are murdered every year. The situation is worst in the north, where cities like Fortaleza, Natal and Salvador have more than 60 murders a year per 100,000 inhabitants. But also a city like Porto Alegre in the province of Rio Grande de Sul in the south, where the standard of living is much higher, has more than 1500 murders a year.

In addition, more than 500 people are killed by the police in Rio alone each year. Back in 2003, this figure was closer to 1500. Such crime statistics create special challenges, not only for the police, but for the entire chain of justice. Another complicating factor is the role of the Military Police who are the ones serving in the first line of duty, and hence, those arriving at crime scenes first.

How the police conduct interviews has a profound impact on the outcome and fairness of the subsequent criminal proceedings. Brazil has a prison population of 620,000 people; up to 60 percent of them are serving without a final, enforceable verdict by a court. Only eight percent of all murders in Rio di Janeiro lead to prosecution, and less than half of those cases lead to a final conviction. Not all murders are even investigated. By comparison, the clearance rate in Norway is approximately 98 percent.

Through the introduction of Investigative Interviewing NCHR seeks to encourage the discontinuation of coercive interrogation techniques, with the aim of preventing torture and averting wrongful convictions. In this context, NCHR and the Norwegian Police University College were invited to convene a course in investigative interviewing for high-ranking detectives from the Federal Police, and the Policia Civil in São Paolo.

The course ran over three days, April 11-13. Eyewitness psychology and how human memory impacts on decision-making was emphasised at the course. In addition to facilitating the event Lilian Milnitsky Stein, professor in psychology at Pontifícia Universidade Católica do Rio Grande do Sul, Porto Alegre, and Professor Edson Luis Baldan, Academia Policia de São Paulo, taught at the course.

The course was very well received, despite the extreme condition under which some of the police officers work. Several participants expressed that the course had been a revelation for them, and that they would start the process of implementing the methods taught at their home units as soon as they returned. Strategies for follow-up and further dissemination-work are in the pipeline.