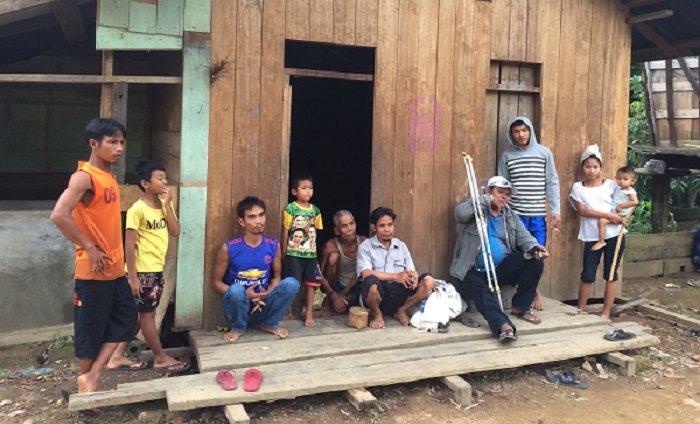 Housing in Delang: There is strong difference in development levels between Indonesian provinces, some being significantly more developed.

Weak and non-inclusive local governance constitutes one of the underlying reasons for Indonesia’s high number of conflicts over land and natural resources. Indonesia’s human rights commission annually receives more than 1,000 complaints over alleged corporate human rights abuse. Indonesia’s Village Law provides an entry point for working towards more inclusive and transparent decision-making at village level. If implemented well, it could help the state meeting its obligations under pillar one of the UN guiding principles on Business and Human Rights.

The discussions on management of assets and natural resources at village level were held in the sub-district of Delang, Lamandau district, in the Indonesian province of Central-Kalimantan May 12-16. The discussions were part of a mapping project that will provide an information- basis for further activities at local and national level. Approximately 110 people consisting of village heads, village administration, customary leaders, and independent citizens from 11 different villages participated in the discussions.

There were three principal questions and a number of sub-questions raised during the discussions:
1. What natural resources and other assets are in the village – and how have these traditionally been managed? 2. What do the villagers perceive as the largest threats to their future well-being? 3. What are the hopes and possibilities with regards to village governance?

Some of the answers to these questions are summarised in the report below.

While the discussions were mainly intended as a knowledge basis for further project activities related to the implementation of the law some follow-up activities were agreed upon:

Two central references from previous work are the report on the human rights impacts of the palm oil industry in Central Kalimantan Province by Ecosoc Institute and the book on rights-based implementation of the village law by writers of Ecosoc Institute and Lakpesdam NU, both supported by NCHR.

Report from NCHR's representative in Indonesia

Traditionally, people in Delang has lived from the land, especially through rotational dry-rice agriculture, supplemented by fishing, a rich variety of fruit trees, trees providing building material to meet housing needs, other forest products, and rubber production. The latter constituted the main source of cash income for many, but the market value of rubber has dropped dramatically since its boom period (in 2008-09 villagers would get paid as much as 17,000-20,000 IDR pr. kg of rubber, whereas they currently only get 5,000 or less). The majority is still living in this manner. Approximately 80% of the population are cultivating dry rice. The citizens of Delang are still mostly in control over their customary forests and fields, and the forests are still largely intact, as opposed to the lowlands where vast areas have been converted to palm oil plantations, primarily owned by large companies.

Better infrastructure and more interaction with the city
Although the villages are still remote by most standards, infrastructure has gradually improved over the last decades - a trip to Pangkalan Bun, the district capital (before Lamandau was established as a district in 2003) , used to take at least 2-3 weeks, and significantly more in the dry season. Since better boats became available, travel time along the river has gradually been reduced. A dirt road was constructed in the 80s, making land travel possible. This road was just recently covered with asphalt, reducing the travel to approximately 5-6 hours by car.

With better access, it has become easier to buy goods from the city, and many villagers want to improve their access to such goods. For example motorbikes, which can reduce the travel time to their fields. Or, as one villager put it “we also want to eat carrots and potatoes” (understood as the fancy food of urban people). However, most find it hard to get a cash income – as their main products, rice and rubber, rarely gets a good price.

Less fruitful crops
The participants at the discussions were quite unanimously saying that they wanted to continue living from their rice fields and forests. Some complained that in recent years there had been more insects disturbing the crops than what was normally the case, less bees (the monetary value of jungle honey has risen six-fold), and also, fruit trees were producing less.  It was suspected that the large-scale monoculture plantations in the lowlands, and their use of pesticides were to blame for this - although climate change, which has strongly affected the rain cycles, could be a reasonable explanation.

Threatened by palm oil plantations
Many mentioned the expansion of palm oil plantations as one of the largest perceived threats to their future. When NCHR first started activities in Delang in 2012, the citizens were unanimously saying that they wanted to keep their lands under traditional management and avoid losing their lands to palm oil plantation companies. This is still the majority stance, although citizens seem somewhat more split on this issue than they have been in previous years.

The village is an important institution with regards to palm oil plantation developments. Various Laws (the law on the Environment, the Law on Oil Palm and the Law on Forestry) requires villagers’ concent  or involvement - and this is managed at village level. Some land documents, such as land clarification letters (Surat Keterangan Tanah) are also issued at village level.

One village head explained that he felt pressure from higher levels of government to approve a palm oil company establishing itself in his village. He feared that the district government would withhold village funding if he failed to facilitate for their wishes. Participants from a different village complained that their Village Head had been tricking citizens to give away their signatures on a blank sheet that they feared would be used to prove ‘consent’.

Some individual investors in Delang have started buying lands and planting oil palm. When in urgent need of money, for example to pay hospital bills or their children’s education, some individuals see few other opportunities than to sell their lands. Experience from elsewhere in Indonesia shows that when cash-crops gets introduced to areas that previously were mainly subsistence-based, social inequality grows as some manage to capitalize and gain control over large areas of land, whereas others get dispossessed. Local food production is decreasing and people get increasingly dependent on the market to fulfil their needs for food and water. A few villagers has already lost their land, and have to work on other people’s fields instead.

Lack of information about the village law
Another issue concerned the village law itself – this law provides increased authority for villages to manage ‘village assets’ which can constitute not only money and physical goods, but also natural resources such lands and forest owned by the villages. The law also contains provisions for more inclusive and transparent decision-making. For example, the village budget shall be approved at a village meeting (Musyawarah Desa) with wide representation. However, few participants had much knowledge about the contents of the law - including even village heads and members of the village administration. Knowledge among the population is necessary for any hopes of actually creating effective checks and balances at village level.

One village head said he had received some guidance from higher levels of government concerning the technical aspects of submitting a budget, but nothing that was related to the democratic participation and accountability that the law was hoped to bring into being.

Another issue of concern related to the formal status of the land. Some of the Delang villages are located in areas that formally constitute protected forest. This status provides some level of protection against development that may harm the forest (although this protection is by no means absolute), but it also makes villagers fear criminalization for carrying out their traditional livelihoods.

The fear of criminalization was also mentioned in relation to the traditional way of clearing lands: by burning. Rotational agriculture is typically conducted by burning an area of 0,5-1 hectares of land, planting it with dry rice for 3-4 years, then letting the forest regrow and recover – often also by planting specific types of trees that are useful, such as those producing fruit. There have been conflicting signals from the authorities as to whether such burning is allowed or not. The law on protection of the environment allows for smallholders to use fires to clear smaller areas, however a circular letter from the local police has stated that it is illegal. Many villages explained that they found this confusing. Some continued their old way of clearing lands, but one of the participants explained she was too afraid to do so and therefore not able to grow any rice.