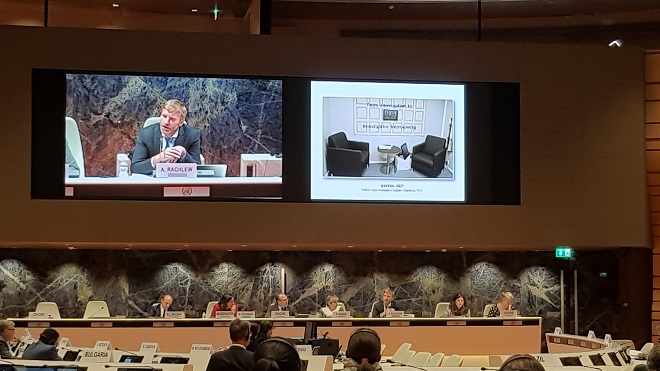 The public event 5 October attracted around 100 participants from Geneva’s diplomatic community and the public. The event was convened by the Convention Against Torture Initiative (CTI) and 14 co-sponsors, including the Norwegian Centre for Human Rights and the Permanent Mission of Norway at the Red Cross Museum in Geneva.

From pursuing confessions to pursuing the truth

NCHR guest researcher and police Superintendent Asbjørn Rachlew conducted role-play on investigative interviewing and the non-coercive interviewing model – K.R.E.A.T.I.V, inspired by the British PEACE model, together with Superintendent Sigurd Sundt. Rachlew shared his experiences from the Norwegian Police in moving away from 'traditional' confessions-driven approach, to rather pursuing information by testing different hypotesis when conducting criminal investigations.

Moving from interrogations to interviews require a complete change of mind-set, Rachlew stressed during his presentation.

Ambassador Hasan Kleib of Indonesia praised the model, explaining that Indonesia had recently begun to train police to use non-coercive investigative interviews, with the support of the NCHR.

The main aim of the event was to showcase the approach of humane interviews in the investigation of crime and launch the first three in a series of online Implementation and Training Tools under the UN Convention Against Torture (UNCAT). NCHR is actively involved in this process.

The tools will support CTI’s ongoing work to provide technical advice to governments and to share good practices between states. Together, the three tools document more than 30 different good practices on their individual themes from 34 different countries. Ambassador Carsten Staur of Denmark thanked CTI's partners in developing these tools: Association for the Prevention of Torture, the Norwegian Police and the Norwegian Centre for Human Rights, as well as the University of Bristol.*

The following day, pursuant to Human Rights Council Resolution 31/31, the Office of the High Commissioner for Human Rights convened an intersessional, full-day open-ended seminar with the objective of exchanging national experiences and practices on the implementation of effective safeguards to prevent torture and other cruel, inhuman or degrading treatment or punishment during police custody and pre-trial detention.*

The process toward global standards for the questioning of victims, witnesses and suspects of crime is gaining traction. The Geneva events were steps forward following the High Commissioner for Human Rights' commitment to develop standards for police forces under UN command with his counterpart in UNPOL, which he made in New York on September 22, says Gisle Kvanvig, NCHR Project Manager for Vietnam.