Building momentum towards the finalisation of principles on effective interviewing

NCHR co-organises virtual event on “Improving efficiency and quality of investigations: Principles on Effective Interviewing for Investigative Authorities” as an ancillary meeting of the UNODC Crime Congress in Kyoto, Japan. 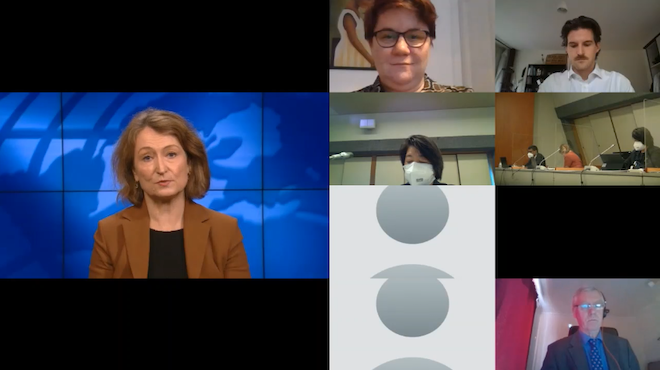 NCHR partnered with Association to Prevent Torture (APT) in organizing the event March 7th, which was moderated by APT Secretary General, Barbara Bernath.

Opening the event, UN Assistant Secretary General for Human Rights, Ilze Brands-Kehris highlighted the importance of effective interviewing and safeguards in upholding the role of public authorities as guardians of human rights.

Deputy Director Division for Operations, UN Office on Drugs and Crimes (UNODC), Candice Welsch spoke of the added value that evidence- and intelligence-led policing can have for criminal investigation, crime prevention, and the administration of justice.

In his welcoming remarks, Bernardo Stadelmann, Vice-Director of the Swiss Federal Office of Justice, highlighted the relevance of this initiative for the Sustainable Development Goals. He also welcomed the reference to the Principles in the Kyoto Crime Congress Declaration.

Professor Becky Milne presented some of the evidence base behind non-coercive interviewing practices and explained how scientifically-grounded techniques support informed decision-making in the criminal justice system.

NCHR’s contribution concerned implementation and consisted of interviews and statements from Members of the Steering Committee and Advisory Council for the Principles –Solomon Arase, former Inspector General of Police in Nigeria; Lilian Stein, Professor of Psychology in Brazil; and Suzanne Jabbour, Chairperson of the UN Subcommittee for the Prevention of Torture.

Gisle Kvanvig of the Norwegian Centre for Human Rights, Nicolas Caruso of UNODC and Alexis Comninos of the APT shared some current and prospective initiatives for implementation of the Principles.

The NCHR would like to thank the co-organisers - UNODC, OHCHR, the APT and the Anti-Torture Initiative – for hosting such a rich event. NCHR is also thankful to Switzerland and Norway for their continued support.