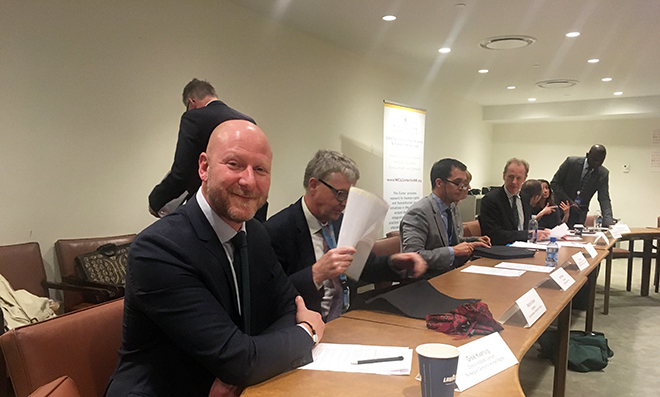 Ms. Vanessa Drummond, Assistant Project Director at the Anti-Torture Initiative, Center For Human Rights & Humanitarian Law opened the session. She went on to reference how former Special Rapporteur on Torture Juan E. Méndez, called for non-coercive interviewing and procedural safeguards in his October 2016 thematic report to the General Assembly. She described that since the release of the report, there has been tremendous interest in the development of the Universal protocol.

In his introductory remarks, Ambassador Lehmann Nielsen expressed that Denmark is keenly engaged in the process to develop the protocol as part of its overall engagement to combat torture. With Denmark’s election to the Human Rights Council, the protocol will be a priority over the next three years in Geneva as well in New York.

At a time when the human rights movement needs allies, the initiative to develop the Universal protocol is important because it punctures the myth that security and human rights are antithetical -Assistant Secretary General Andrew Gilmour.

Ms. Rebecca Shaeffer, Senior Legal and Policy Officer at Fair Trials (Americas), gave an update on the status of the protocol. Further, she explained the aims of the Universal protocol, which are to offer a practical tool to change practices and make investigations more effective while upholding the rule of law, and thereby institutionalize the provisional safeguards during the first hours of arrest.

- Will play a significant role
Mr. Nils Melzer, Special Rapporteur on torture and other cruel, inhuman or degrading treatment or punishment, stressed that “the Universal protocol will play a significant role in the prohibition of torture and other cruel, inhuman, and degrading treatment”. He elaborated on the negative consequences that occur from torture and the fact that it has been scientifically proven that it produces unreliable information and leads to instability in societies.

A tool for the fulfilment of the Convention Against Torture
Mr. Jens Modvig, Chairperson of the Committee against Torture, stressed how the Universal protocol supports States in implementing their obligations under the UNCAT, specifically Articles 11 and 15. Article 11 provides that State Parties must regularly review their interrogation rules, instructions, methods and practices as well as arrangements for the custody and treatment of persons subjected to any form of arrest, detention or imprisonment in any territory under its jurisdiction, with a view to preventing torture. Article 15 puts an obligation to exclude and dismiss any evidence or a confession taken under duress. He further stated that moving from accusatory interrogations to investigative interviewing methods does not require sophisticated tools nor costly investments.

Increasing the credibility of the criminal justice system

Mr. Malcolm Evans, Chairperson of the Subcommittee on Prevention of Torture, discussed how the universal protocol will guide the implementation of basic procedural safeguards. According to Mr. Evans, one of the main reasons this initiative is of high importance is because it reflects a holistic approach. In addition to offering guidance on how legal safeguards should be embedded in the justice system, the changes in the approach to interviewing protect the integrity of the criminal justice system itself.

Building on decades of bilateral cooperation

NCHR’s Gisle Kvanvig presented key lessons learned from a decade of cooperation with Norwegian police on in implementing investigative interviewing in countries in Asia and Latin America, stating that:

Although, motivations and justifications differ - depending on the political and criminal context - officers, public defenders, prosecutors and judges find the method understandable and applicable. Whether they work with intelligence gathering or criminal investigations, they appreciate the value of accurate, reliable and actionable evidence and intelligence that will stand the test of trial. Accordingly, the potential investigative interviewing has for decreasing the use of coercion and torture, while enhancing fair trial and thereby the rule of law is unquestionable.

The discussion that followed highlighted among other issues the need to fortify advocacy on the universal protocol, and particularly with regard to criticism emanating from concerns within the security community.