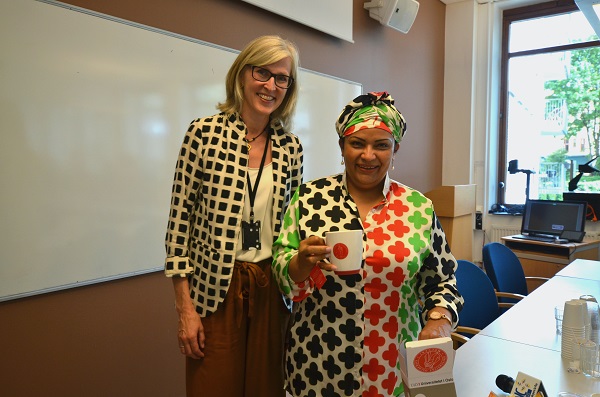 The peace process between the Colombian Government and the FARC-EP provided a unique opportunity not only to reunite a society torn apart by conflict but also to build a more just peace that responds to needs and rights of both men and women.

Providing an instrument for gender inclusion

The establishment of a sub commission on gender as part of the formal peace architecture was an innovative instrument for gender inclusion and for holding the parties accountable. The sub commission was led by one representative from each party.

Victoria Sandino led the sub commission on behalf of FARC-EP throughout the process. Sandino has been politically active and fought for the FARC guerilla for more than 20 years. For the last four years she has participated in the peace process including in the sub commission.

The sub commission was a result of continuous pressure from women's organisations in Colombia. No generation in Colombia have experienced peace, and the war has had severe consequences for women. It has been vital to include the needs of women and a gender focus in this process. Women need to be seen, heard and taken into consideration, Sandino says.

A gender perspective was not included in the first framework agreement. The sub commission on gender engaged with women’s rights organisation and civil society across Colombia to gather thoughts and create strategies on how to best incorporate a gender perspective in the peace process.

Sandino explains that the gender suggestions to the deal received a lot of political and societal resistance. The emphasis on sexual orientation and the rights of the LGBTI community were perceived as particularly problematic, she explains, and terms needed to be renegotiated in order to reach a consensus that at the same time would not decrease the protection of sexual minorities. The revised agreement made some modifications but maintained a strong language on gender.

On 24 November 2016, the Colombian government and the FARC rebels signed a revised peace agreement which included a gender perspective. The agreement was passed in Congress and entered into force 1 December. With this agreement the country is closer to ending more than 50 years of armed conflict. The implementation of the agreement is now the main challenge.