On 24-25 January, around 180 people gathered in Jakarta to discuss implementation of the law. The key concern was how to strengthen participation and democracy at village level, amid concerns that regulations from above undermined village autonomy and the scope for inclusive bottom/up processes. 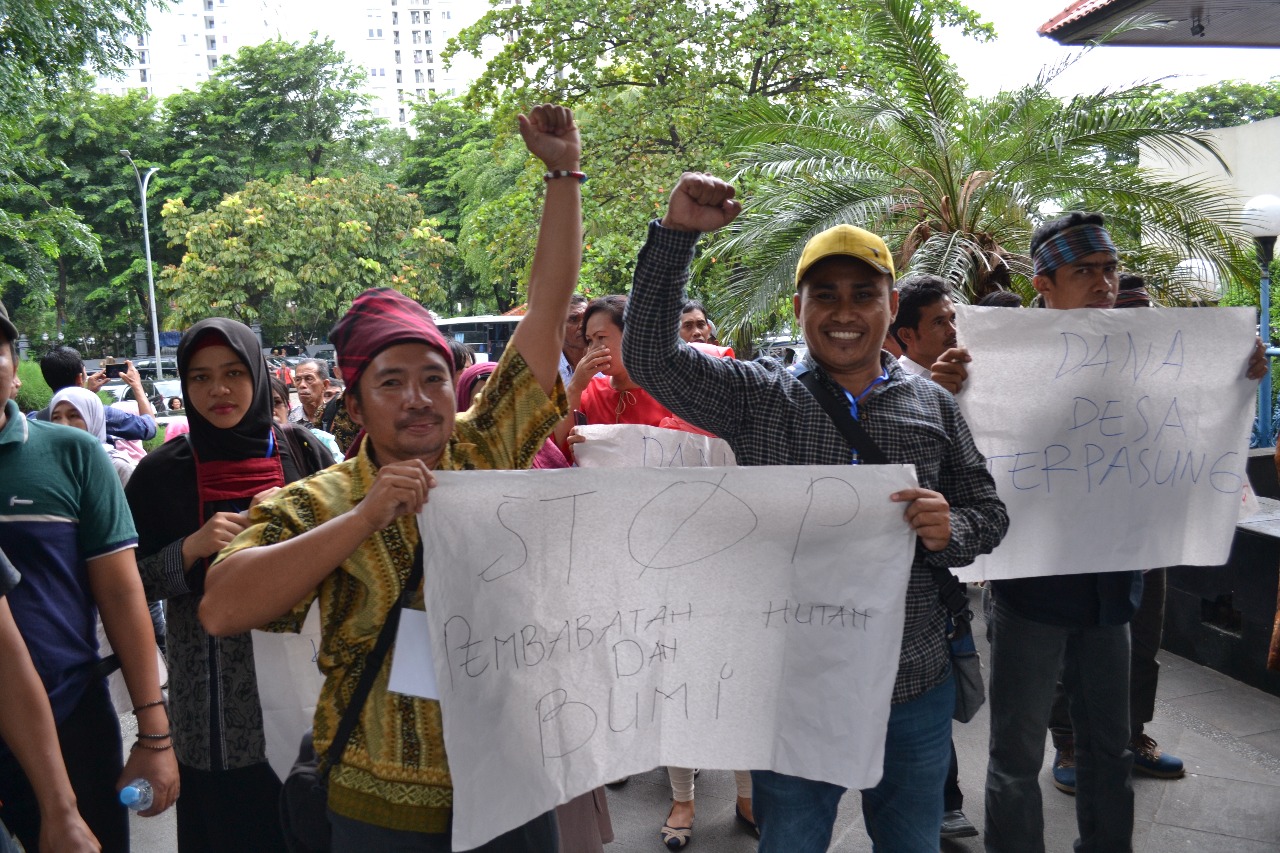 After the event, participants went to the Ministry of Villages, Underdeveloped Regions and Transmigration to deliver recommendations. The signs read: "Stop ruining the forests and the earth", and "The village funds are stuck". (photo: Ecosoc Institute).

The participants were primarily independent village citizens, members of village government, and social activists. The processes of implementing the law was a cross cutting concern at the conference. The regulatory framework is constantly developing at both national and regional level and input from civil society and data from grassroots’ level is strongly needed to make sure political decision are in line with the needs on the ground.

Indonesia’s Village Law can have strong effect on human rights enjoyment in rural Indonesia. It was hoped to bring about increased transparation, democratic participation and accountability at village level. This, in turn, could lead to more inclusive decision-making related to natural resource management, thereby reducing the risk of corporate land-grabbing. Further, increased financial transfers to villages – where a majority of the country’s poor lives - could foster increased fulfillment of basic social and economic rights. There is however a fear that the funds will feed into partonage networks and corruption, and that regulations from above can undermine the scope for inclusive bottom-up processes.

The NCHR, in collaboration with Ecosoc Institute and Lakpesdam NU, published a training manual last year, Guide to rights-based implementation of the Indonesian Village Law, for use at village level. The guide was developed to facilitate a human rights-based implementation of the law, emphasizing the importance of participation by women and indigenous people in decision-making.

The event was opened by M. Imam Azis (PBNU), Syafii Ma’arif (Muhammadiyah) and Taufik Madjid, director general at the Ministry of Villages, Underdeveloped Regions and Transmigration. The participants then formed three working groups on Village Economy and Village-Owned Enterprises, Management and Supervision of Village Finances and Democracy, and Citizen’s Participation and fulfillment of Fundamental Rights.

Recommendations from the working group were discussed and agreed on in pleno, and delivered to the Ministry of Villages, Underdeveloped Regions and Transmigration. 11 key points can be read here (available in Indonesian only). The conference and these recommendations were also reported by more than a dozen other local and national news media outlets in Indonesia.