To mark the International Women’s Day on Monday 8 March, the Norwegian Centre for Human Rights (NCHR) would like to point to our Chinese partners important work towards gender equality in China. Raising awareness about domestic violence in China, contributing to better education on gender and human rights in Chinese universities and publication of the first Chinese textbook on gender and human rights are some of the achievements our Chinese partners have made with the support of the NCHR. 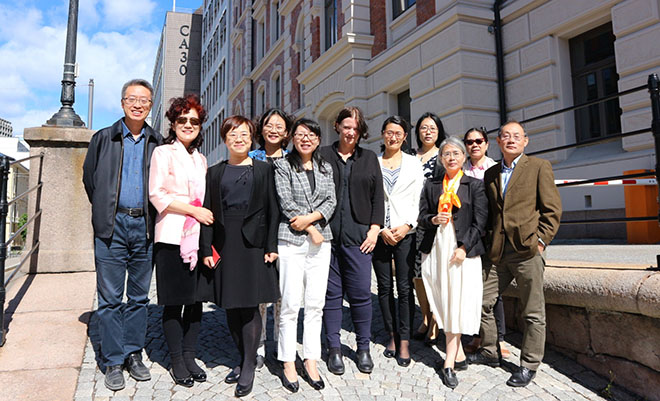 Supporting education for gender equality at Chinese universities
Although women’s position in the Chinese society has improved in the last 25 years there is still a large gap between theory and practice for women’s rights. Discriminatory practices still exist on many levels in China. One way that the NCHR has tried to contribute to increased knowledge about these issues has been through support to the education of Chinese university teachers on gender and human rights issues. Together with the Constitutionalism Research Institute at China University of Political Science and Law (CUPL) and the Swedish Raoul Wallenberg Institute (RWI) the NCHR has sought to inspire Chinese teachers to include gender equality issues in their teaching activities. As the project continues the NCHR hopes to see a lasting impact on Chinese education in this field.

first Chinese textbook on gender and human rights. The book was published in 2020 and is written by an editorial group of Chinese researchers and civil society representatives with special knowledge about gender equality and human rights. The editorial group visited Oslo in 2018 and met with representatives from many Norwegian organisations and institutions working on gender equality issues.

This textbook on gender and human rights is the first of its kind in China! I have witnessed an increased interest in gender issues among Chinese academics and among Chinese students in the last years. I hope that the textbook will inspire and make it easier for Chinese university teachers to include a gender perspective in their teaching activities. It is also my hope that the textbook will contribute to more public awareness about gender and human rights in China.

Our partners at RWI are organising an interesting webinar about gender equality and empowerment of women in China on the morning of 8 March. Professor Liu Xiaonan will contribute to this webinar as will the former NCHR China Programme Director Lisa Stearns. More information about how to participate in the RWI webinar

More information about Equality and Non-discrimination work at the NCHR