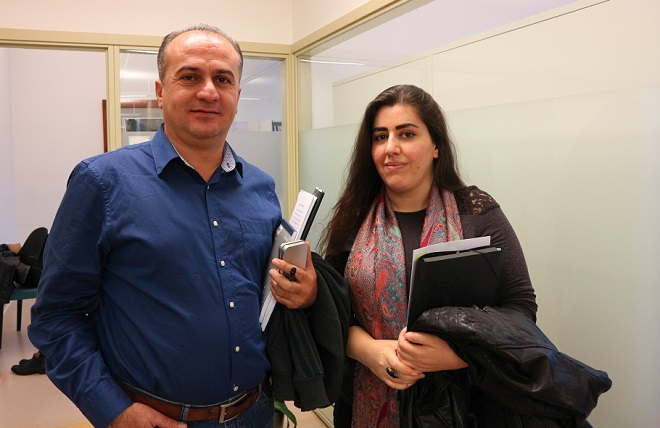 - As a minority I’ve faced a lot of problems and seen crimes being committed against our community, and I want to contribute to spread information about our rights. This course matched my high expectations. Hopefully one day we will have it in Iraq, and I want to be an advocate for that, says Kiret.

As a Yazidi in Iraq I have suffered from the absence of human rights. Therefore it was very important for me, as a lawyer, to participate in this course and learn how I can defend my people. When I get back I intend to use the knowledge I have acquired about international human rights conventions to put pressure on local authorities, and when processing cases myself, Barakat says.

The Yazidis of northern Iraq have their own ancient culture and religion and have been relentlessly targeted by The Islamic State of Iraq and the Levant (ISIL, calling itself Islamic State) who consider the Yazidis to be infidels. ISIL has been accused of genocide of Yazidis in Iraq by the UN. Hundreds have been executed and nearly 4000 Yazidi women have been kidnapped by the terrorist organisation since 2014.

- I believe that we have faced genocide at the hands of ISIL which is an international crime. As the local authorities have not been able to protect their people, this responsibility should shift to the international community, but nothing is happening, Barakat says.

Internal disputes between the various tribal or religious groups have also taken its toll on the Yazidi population residing in Iraq, and there is little formal protection offered by the Iraqi Government.

You live in constant uncertainty. Every day we fear hate speech inciting attacks on our villages and people. There are a large number of Yazidis going to universities and they face all kinds of discrimination in education and do not feel safe, says Barakat.

- Being Yazidi or any other minority in Iraq means suffering. As a Yazidi you are not allowed to become a judge, president of a university or a general in the military, you are not allowed to represent your country in sports and you cannot work in restaurants because no one would eat there. In addition, your land is not really considered yours, you have close to no political influence and no one will protect you if you are under attack, Kiret adds.

Kiret explains that as a result of persecution nearly half his village located at the eastern side of Tigris, approximately 2000 people, have fled to Europe.

- There is however many minority groups still resisting in Iraq, trying to hold on to their lands. We will not leave our country, but we need help. While for instance Christian minorities have other Christian majority countries supporting them and intervening if they are under attack, we do not have anyone. All we have is Iraq, and the local authorities do not help us. We just want to be alive and go about our daily lives in dignity, Barakat adds.

Tags: Equality and Non-Discrimination, Equality NCHR By Susanne Flølo
E-mail this page
UiO > The Faculty of Law >
Norwegian Centre for Human Rights > About the Centre >