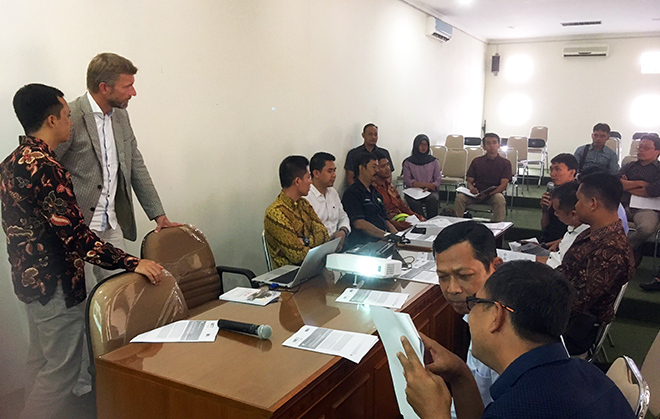 On Tuesday, October 30, the Centre for Human Rights Studies at the Islamic University of Indonesia (Pusham UII) organised a seminar for police officers on the topic of Investigative interviewing in Yogyakarta, Indonesia. Students and staff from Pusham UII were also among those attending the seminar. Pusham UII has been working with police reform and human rights based policing for almost twenty years: both developing a human rights teaching module and curriculum for the National Police Academy in Semarang, and promoting community based policing in the city of Yogyakarta.

The participants were given an introduction to investigative interviewing by superintendent Asbjørn Rachlew, guest researcher at NCHR. Prior to this, Director Eko Riyadi gave a quick introduction of the long-standing cooperation between Pusham UII and NCHR. The talk on investigative interviewing was well received, and many nods of recognition were seen among the attending police officers. After having presented this material in different parts of the world, NCHR has experienced that the reactions are strikingly similar. Concerns and questions raised by police personnel around the world are also equally recognisable: “How can the security of the interviewing officer be guaranteed during the interview?” “How should we handle uncooperative suspects?” “What do we do if the suspect invokes the right to silence?”

Some of these questions are easier to answer than others, and most can be answered by referring to the training material that has been developed by the Norwegian police called K.R.E.A.T.I.V.. One important step in the K.R.E.A.T.I.V. model concerns the physical preparations of the interview. Therein lies the answer to the security question. Also, the right to avoid self-incrimination, and thus the right to silence, is a right that suspects are granted both by international human rights law, and often also by national law. The police should by no means seek to bend or limit this right. Importantly, both experience and research tell us that the prospects for getting the suspect to provide relevant information increases if the interview is conducted in a manner that stimulates good communication. This is very much the essence of investigative interviewing.