How to get to the NCHR from Gardermoen Airport 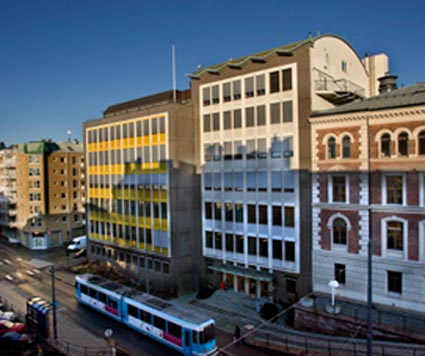 The NCHR offices, exxterior. We are situated in the two bulindings to the left, first and second floor. Entreance in the building in the center.

The fastest (but most expensive, around EUR 20,- one way) way to get to downtown Oslo is by the Airport Train, which departs every 10/20 minutes per hour, to Nationaltheatret Station (the one after the Central Station) in the center of Oslo.

When you have exited the train, you'll find yourself on an underground train platform. Don't panic! Just walk straight ahead, in the same direction as the train you've just left, until you reach the very end of the platform. There you'll ascend by an escalator to ground level, and you'll enter daylight on a small square. On the opposite side of the street, straight ahead, you´ll find a yellow, old building. That's the Nobel Institute, where the decision regarding the Nobel Peace Prize is made. On your left, on the opposite side of the main street, you'll see av modern, triangular building, thoroughly fenced in. That's the former US Embassy.

Straight across the square, you'll see two streets descending. One is next to the US Embassy, that's Løkkeveien, which you're not interested in. The other one's the one that we look for: Parkveien. Cross the square, enter Parkveien, then turn first street to the left, and you're in Cort Adelers gate. Two Blocks down, near a tram-stop, on your left hand side, you'll see an office building from the sixties. Its entrance comes immediately before a short hill up to something that is an old school building. That's our entrance. You'll find us in the first and second floors, reception on the first floor.

We look forward to seeing you!