Debate: Can Law save the Climate?

A public debate on the usefulness of and obstacles to regulatory and other legal approaches to climate change. 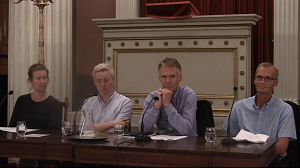 The debate was held on September 4th 2012 in Gamle festsal at Domus Academica, University of Oslo.

UiO > The Faculty of Law >
Services and tools >