As one of the social events of the European Group in Oslo - we invite the conference participants to a meeting with Blitz. 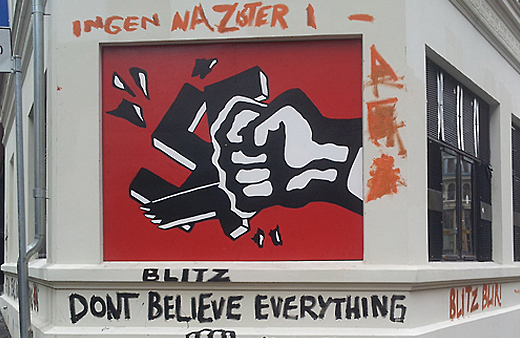 Famous grafitti in Oslo outside the Blitz house. Photo: private.

Blitz has been an autonomous youth house dedicated to political activism and underground culture since 1982. Blitz is one of the oldest houses of its kind that still exists in Europe.

The house consists today of a café with good vegetarian food at reasonable prices, a book café, a radio station, band practicing room and a studio. There is also a concert scene and meeting rooms for political activism. The activities taking place in the house depend on the current interests and activities of the house users.

The main political issues for Blitz have been anti-nazi work, international solidarity, prisoners’ rights and housing politics. Blitz does not have a political platform, but will always fight against capitalism, sexism, racism, homophobia and animal exploitation.

Blitz will serve a light meal made by our Palestinian friends; in addition you will be served Blitz famous waffles.

After the programme is finished we will walk together to Asylet where other participants of the conference will also meet up, have a drink, listen to music and continue the discussions. On our way to Asylet we will pass the autonomous culture house Hausmania and a Palestinian ‘refugee camp’.

Due to the large number of participants at this years European Group conference, the organizers has decided to offer three parallel social events.