In the efforts to create international justice, it is unclear for whom justice is intended. 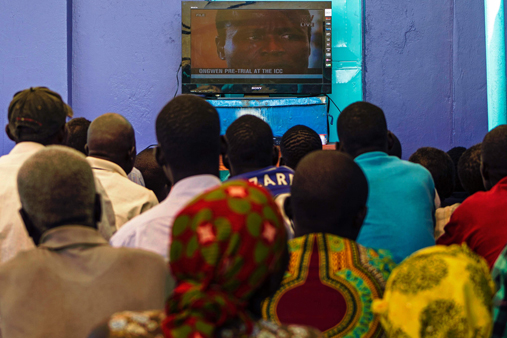 People in northern Uganda watching the trial of of a former LRA commander taking place at the International Criminal Court in The Hague in the Netherlands – thousands of miles away from where the alleged crimes took place. Photo: NTB Scanpix.

Who are the justice advocates?

There are more than 110 international NGOs in The Hague working to create a better world. One of many ways they are working for global justice is to influence institutions such as the International Criminal Court (ICC). But why has criminal punishment in the aftermath of war and gross human rights abuses become so central to the international human rights agenda? Who is working with this, and what do those working in The Hague know about the conditions in countries where the ICC is involved?

- The problem, says researcher Kjersti Lohne, is that conceptions of what constitutes justice and human rights have their geographic and material placement in the West. We have to ask questions about who are in a position to represent «global» justice.

What roles international human rights organizations play in shaping the development of global criminal law is the topic of criminologist Kjersti Lohne’s doctoral dissertation. Lohne defended her dissertation entitled «Advocates of Humanity. Human Rights NGOs in International Criminal Justice» on October 9th, 2015. International criminal law has interested Lohne for many years. Already while working on her master’s thesis, she looked at the role of the ICC in the violent conflict between the Ugandan government and the Lord’s Resistance Army (LRA).

The doctoral dissertation is based on fieldwork and interviews with central actors in the international criminal justice field, including in The Hague, Belgium, England, Uganda and Rwanda. By taking a closer look at the role of human rights organizations, Lohne provides an understanding of the values and power relations that form the basis for what she calls an emerging global order of criminal justice.

The activists in the field of international criminal justice belong to a class of Western professionals, and it is difficult for non-European nationalities to work in some of the most influential positions, Lohne says.

During her fieldwork in the Hague, Lohne interviewed many of those working in relation to the ICC. These human rights advocates consisted mainly of white women from the West. They were in their late 20s and early 30s, educated in international law or political science. Few had a background from or had visited the countries whose conflicts they and the ICC work with. They received most of the information about ICC-related conflicts from web-based sources.

Lohne shows how the field of global criminal law elevates Western humanitarian ideals. By using legal strategies, human rights organizations equate international criminal law with global justice. Their views are not, however, always in accordance with civil society’s sense of justice in countries where the ICC is involved.

- In northern Uganda, for instance, local civil society representatives experienced that their voices were not heard by the «international community,» represented by the ICC and international human rights organizations. The local community was primarily interested in seing an end to the violence, and to get an acknowledgement of that it was not only the LRA but also government forces who had committed terrible atrocities against the local population. As the LRA had no incentive to lay down their arms when indicted by the Court, many felt that the ICC charges against the guerilla group hindered peace talks and prolonged the war. That the ICC exclusively brought charges against the LRA – and not government soldiers – was also very poorly received. People lost what little trust they had in the Ugandan government. Some felt that the government was not interested in justice, but wanted help from the international community to win the war.

The Hague - a hotel for tired war criminals

- The legitimacy of international criminal justice s dependent on perceptions, and to what extent legitimacy claims are acknowledged by relevant social actors, such as recipient communities. Here, frustration from local civil society not only concerned who has been indicted by the Court, meaning only one side of the conflict, but also how convicted war criminals are punished. Questions were asked concerning the justice of war criminals from East Africa serving their sentences under very different conditions than what they would have in their home countries? Activists and critical voices in Uganda and other places talked about «The Hague» as a hotel for tired war lords, Lohne says.

Justice for whom? - The global victim

International criminal justice is not just ideology; it is also an industry where Western NGOs has carved out a role as speaking "for" justice, and on behalf of victims. But this is a «justice» in which there is also invested self-interest. Lohne not only questiones human rights organizations’ conceptions of justice and how these often contradict local ideas of justice, but also the strong faith in the use of criminal law as an effective tool to achieve global social justice.

In European nation-states there has been a legal tradition of using punishment restrictively. We cannot ban everything we do not like. This is largely absent in discussions on global criminal law where NGOs often are champions of creating «waves of criminalization.» Lohne claims that human rights organizations have an extreme faith in the ability of criminal law to create better societies. She points out that it is incredibly important to focus on violence and abuses around the world, but that the political and social context often disappears in favor of simple stories of war and peace, good and evil, victim and perpetrator. Victim campaigns are an example of this. The idea of «the ideal victim» is particularly strong in international criminal law, says Lohne. But these are stories that often say more about «us» and about being in a position to help, rather than recognizing people who have survived war and mass violence as political individuals with ideas and opinions about the justice that is pursued in their name.

The Lord’s Resistance Army (LRA) is a guerilla group, led by Joseph Kony, which since the late 1980s has operated in Uganda, South Sudan and the Congo, among other places. In 2015 the ICC charged the LRA with war crimes such as murder, rape, slavery and the use of child soldiers.