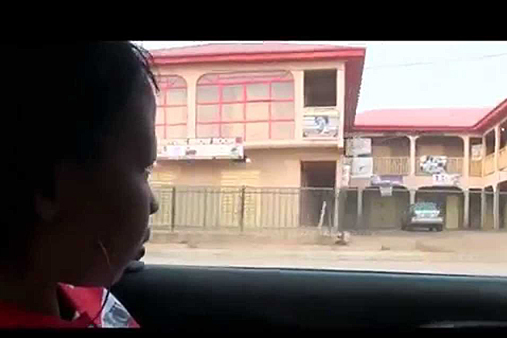 From the movie Becky's Journey, a documentary about a 26-year old Nigerian woman who wants to go to Europe. The director is MIGMA-participant Sine Plambech. Photo: S. Plambech

Becky is a Nigerian woman in her twenties who dreams about a life in Europe. She has attempted to leave Nigeria several times. The first time she paid 50 000 NAIRA (3 000 NOK) for forged travel documents, but was stopped already at the airport in Nigeria.

Becky knows that she will have to sell sex to earn money if she makes it to Europe.

- If you do not want to do prostitution – don’t bother to go to Europe.

She knows a woman who sells sex in Italy, who has told her:

- We make love anywhere. As long as the man pays me my money.

Becky thinks that this is the best chance she has of a better life.

- The ones I have seen doing prostitution they all look beautiful when they come back to Nigeria, she says.

She made her second attempt at crossing the external borders of Europe in 2011. The travel expenses were paid by a female pimp already in Italy. Together with a group of other migrants, she was brought through the Sahara to Libya. From Libya, the journey was to continue across the Mediterranean to Italy.

After 10 days in the Sahara Desert, food and water ran out. Not all of the migrants survived the journey. When they finally made it to Libya, the civil war broke out, and it was no longer possible to cross the Mediterranean. After living in hiding in Libya for two months, she had to return to Nigeria. Not everyone survived the return journey either. Despite two failed attempts, Becky says that she has not given up on the European dream.

We meet Becky in an award-winning documentary by Sine Plambech, one of the participants in the research project MIGMA – Transnationalism from above and below. Migration management and how migrants manage, led by Professor May-Len Skilbrei. One of the questions Skilbrei wants answered is what influences the migrants when they choose which countries to go to and how to get there.

- Minister of Immigration and Integration Sylvi Listhaug has said that Norwegian authorities should send a signal to the world that receiving asylum in Norway is difficult. What she is forgetting is that Norwegian authorities are not the only ones «sending signals» that influence migrants. Migrants exchange information with each other, and sometimes they receive true or false information from people exploiting their vulnerabilities. Even though Listhaug is speaking to the migrants, it is not certain that they choose to listen to what she is saying.

Skilbrei has for years researched women’s experiences with prostitution, human trafficking and migration. In MIGMA she is looking more closely at European authorities’ attempts at returning Nigerian migrants to their home country. Other researchers participating in the project will study European authorities’ efforts at managing whether and where migrants go – and how migrants make their decisions.

- Through my research, I have since the early 2000s met irregular migrants doing their best to make everyday life work in a situation without rights and with the fear of being discovered by Norwegian authorities. This made me increasingly interested in the politics and the institutions that migrants face, Skilbrei says.

- This is a particularly important juncture in time to study developments. Many European countries have introduced or are planning new policies and practices intended to make it more difficult and less attractive to go to Europe. This is not the first time that European cooperation on migration management meets with obstacles, but it is possible that the current situation challenges the European cohesion to such an extent that states will reclaim some of the authority they have until now increasingly delegated to supranational bodies. In MIGMA we focus particularly on return migration, and it is not difficult to envision cooperation on this and each individual state’s practice looking very differently when many of the recent arrivals are turned into rejected asylum seekers that have been given deadline to exit Europe in the period ahead of us, Skilbrei explains.

Regulations and bureaucratic practice across borders

- When speaking of migration policy, we often speak of regulations and institutions. It is important to understand how rules are enforced. Over the last few years I have interviewed many who work in the immigration field, and I think it is important to get an increased understanding of "migrant management" as a practice and institutional framework. Criminologists and sociologists of law are very concerned with law in the books not being the same as the law in practice. Sets of rules work together, not only in the sense that they are alternately employed, but also that they influence each other in practice. Norway does not only manage migration and return migration through the Immigration Act; what Norwegian authorities can and cannot do is also founded in many other rules and regulations. Norwegian policy is additionally guided by international law and practice. This makes the immigration field a complex field in a state of continuous development. Luckily we have a lawyer on our team to help us understand international and national norms and agreements in this field.

- Becky is only one of many to sacrifice much to go to Europe. We know that very few Nigerian migrants coming to Norway are granted residence permits, and many have bad experiences while waiting. There is often a great disparity between what migrants want and what they can receive. This is one of the reasons why it is important to gain more knowledge about this group of migrants, and what the background is for why they choose to go. I have with me a group of leading researchers already very familiar with the field, and I look forward to work with them and to recruit new researchers to the field, Skilbrei concludes.

About the research project

MIGMA is funded by the Research Council of Norway, Programme for Welfare, Working Life and Migration (VAM).