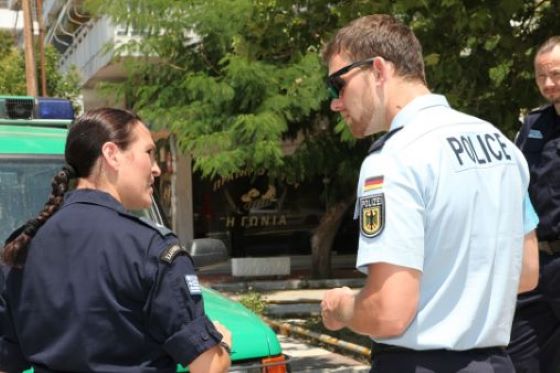 Physical proximity is not enough

Professor Katja Franko at the University of Oslo and Professor Helene Gundhus at the Norwegian Police University College have interviewed Norwegian police officers who have participated in operations under the direction of Frontex, the EU border control agency. The background for the research project was getting to know more about police culture in transnational police work.

- A normal perception is that there is only one police culture common to all police, that police officers share one set of norms, values and ideals which exists across country borders, Gundhus says. But when our informants described the experience of working in Frontex, they rather described a feeling of distance to the host country and an experience of culture clash between different police cultures.

In order for the cooperation to function as well as possible, the police officers were dependent on everyone having a common understanding of the work tasks and the police identity. This was not always the case.

The motivation of several of the Norwegian police officers who have participated in Frontex operations has been to raise the standards of the police work conducted at the borders of Europe and to improve the conditions of the migrants who dwell in the areas. They felt that working in Frontex operations made it possible to «be where the action is,» to establish contacts and create informal networks with foreign colleagues that they could utilize upon returning to Norway.

This motivation was not always shared by their police colleagues from Eastern and Southern Europe. These often participated in Frontex operations because they had been ordered there, or because the police service of their home country lacked resources. Instead of the cooperation creating greater closeness, it lead Franko and Gundhus’ informants to feel a need to distance themselves from police officers who exhibited a more brutal manner towards the migrants. At the same time, they expressed understanding for why these police officers behaved the way they did:

“… I think the most important quality you can have when you travel abroad, in addition to the professional competency: to be able to put yourself in the situation of your colleagues here. I believe this is true for all operations, regardless of where you are in the world, whether it is Frontex or other international operations, Haiti or wherever. This strengthens the bond between us, to be able to say «What you are doing is not good, but I understand why you are doing it.»

Prefer to be crime fighters

- Another challenge our informants told us about was their relationship to their host countries who were responsible for the actual border control operation, Franko says.

In principle the police officers did not have police authority in the country in which they worked, and it was the host country that decided how actively the guests could participate in the control work. This led to situations where the police officers did not get to do anything, but also to situations where they participated in the control work to a greater degree than they were really allowed.

The police officers were happiest when they could be active, and particularly so if the work involved crime-fighting tasks such as searching for fake ID papers or apprehending smugglers. They felt it meaningless to have to stand and observe others doing the job, but also said that as guests they had to be humble towards the host country and their desires and needs.

Believable migrants at the border

For most people the concept of good police work is tied to proximity – both that the police is visibly present in a local community, but also that they have a cultural proximity to the population. Such proximity largely disappears in transnational police work, something exemplified by Frontex, Franko says. Both linguistically and culturally there is a great distance both among police from different countries and between the police officers and the migrants they are to control. At the same time this linguistic and cultural difference can lead to a greater understanding of others’ situations. The police officers interviewed by Franko and Gundhus told that they got a better understanding for the migrants’ situation when they met them during the border control work at the external frontiers of Europe than they did when they handled migrants at home in Norway. They perceived the information they received from the migrants at the border as more recent and authentic, and thereby also more believable than the information they received from migrants in Norway.

- Frontex leadership is trying to forge a common European border control culture, where respect for human rights is a core concept. Despite this, there is little to indicate that such a unified common culture exists among those conducting the border control, Gundhus concludes. The current transnational police work seems more like a patchwork than a harmonious organization.

By Marit Fosse
E-mail this page

Frontex is the EU border control agency, and is responsible for coordinating the police work conducted along the borders of Europe. Norway is a member of the Schengen Agreement, and therefore contributes to the border control work with personnel and equipment.

The purpose of the research project Crime Control in the Borderlands of Europe is to analyze the effects the increasing emphasis on border control have on crime control. The project is funded by the European Research Council and is a collaboration with the Norwegian Police University College.

Professors Katja Franko and Helene Gundhus were recently awarded the Radzinowicz Prize 2015 for the article Policing Humanitarian Borderlands: Frontex, Human Rights and the Precariousness of Life.

KRIM2952 - A Criminology of Globalization