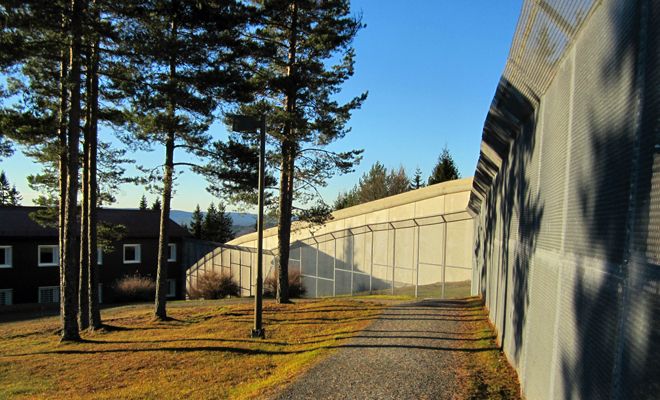 Behind the walls of Kongsvinger prison, many Romanians await sentencing. Photo: T. Ugelvik

He has just arrived at the prison. It is dinnertime, and today fish is being served. The inmate tries to explain to the staff that he is allergic to fish. The guards do not understand what he is saying, and tells him that he has to eat the fish. An argument ensues, and the inmate is placed in solitary confinement.

The prisoners have a competition in the gym to see who can lift the most weights. An Albanian wins. Afterward a rumor is circulating that it nonetheless was a Swede, who came in second place, who received the first prize.

These are some of the stories Roma and Romanians tell of life in Norwegian prisons. Not only do they describe Norwegian correctional services as both racist and discriminating, they are also confronted with the same attitudes in Norwegian society at large.

«The Roma and Romanians I interviewed in Norwegian prisons are very split in their view of Norway and the Norwegian. On the one side they tell of discrimination and racism, while at the same time they feel that Norway is a very good society to be in,» says researcher at the Department of Criminology and Sociology of Law (IKRS) at UiO Dorina Damsa.

«There are several reasons as to why they view the prison system, and the treatment they receive in Norwegian prisons, as racist and discriminating. A main challenge is language and communication challenges,» Damsa says.

«They do not understand the rules and do not understand what officers are asking them to do. This can in turn lead to misunderstandings and conflicts between them and prison officers. This is often the reason as to why they experience discrimination. We have seen many examples where they choose to interpret negative experiences, such as rejections of applications, as expressions of discrimination. They say that the officers treat them like they do because they are Romanians and that the officers are racists. Roma and Romanians feel that they are treated differently, and often say things like ‘they wouldn’t ask a Norwegian prisoner to do this.’ Communication problems do not make it any easier.» Damsa says that it can take as long as a week to get an interpreter who speaks Romanian. This leads to much frustration. Even simple messages can create great misunderstandings and conflicts.

An Ethnography of Prisoners' Transitions (EPTrans)

These findings come from the research project «An Ethnography of Prisoners' Transitions (EPTrans)» which is a qualitative study of the reentry process following a prison sentence for foreign inmates. The project wishes to bring forth the perspective of Romanian inmates and to look at what happens when they are released.

«The aim has been to find out more about the way back after serving a sentence and how prisons work on preparing the foreign inmates for release,» says lead investigator Thomas Ugelvik. He has headed a research team in Norway which has collaborated with prison researchers at the University of Bucharest. The study has been conducted both in Norwegian and Romanian prisons.

«In Norway, the work of the correctional services is very much geared towards rehabilitation and the job of providing inmates with opportunities to live a life without crime after release. This is largely seen as a common welfare state responsibility, and correctional services work closely with all the other welfare state actors such as the health care services, the education system and NAV [Norwegian Labour and Welfare Administration]. This changes when faced with foreign inmates due to be deported upon release. The welfare state does not view foreign inmates as their area of responsibility in the same way. The prisons try to plan and arrange for a constructive release also for the foreign inmates, but there are limits to what they can achieve by themselves, not the least when it concerns release to a different country.»

«Norwegians are easy to hustle»

Romanians and Roma are incarcerated in Norwegian prisons for many different types of criminal offenses. Primarily, there are infractions of the Immigration Act, as well as petty crime such as less serious violence and thefts, but in a few cases more serious crimes are involved.

Some tell that they steal expensive running shoes, perfumes and electronics from stores, which they in turn resell on the internet. They also steal clothes and items from recycling stations, which they repair and resell. Several express that Norwegians are easy to hustle. One said that: «Norwegians are not too concerned with their property, so it is easy stealing cell phones and purses.»

They subsist not only on larceny, but also through panhandling. They tell stories of drunk Norwegians on their way home from a night on the town kicking their beggar’s cups, conflicts with the police and security guards who evict them from shopping centers, parks and groves.

Not only do many Roma and Romanians view Norwegian correctional services as racist and discriminating, they understand their own criminal offenses as tied up with and an answer to that racism and discrimination which they experience. As they do not have any formal qualifications (most have not completed high school in Romania), they feel that they do not have any other options:

«We have no rights. Nobody wants to give us a job. We have to do this to survive.»

«As long as they are in prison they have access to the same welfare goods as Norwegian inmates, but this ceases the moment they are on the outside of the walls. The inmates tell that they are ill-prepared for their release. They have no money and no resources. Most are deported to Bucharest, even though most neither come from, nor have any connection to, that city. This leads to much uncertainty and worrying,» Ugelvik and Damsa say.

«The Roma and Romanians who were part of our study did not return to Norway after being deported to Romania. Several did, however, quickly return to this part of the world, but ended up in Sweden or Denmark instead. After the release and deportation to Romania, it can take a couple of weeks where they meet friends and family before returning to Scandinavia. This is a very mobile group of people,» Ugelvik and Damsa say.

The mobility of the Roma and the Romanians also created challenges for the researchers during the study. As there was a high consumption of cell phones and telephone numbers, they ended up, on suggestion by the Romanians themselves, using Facebook and Snapchat to keep in touch. On Facebook, dedicated groups were created which also provided more information than what was originally intended in the study. Here, the researchers could, among other things, follow their travels through Europe.

While they previously primarily went to Spain and Italy, it was particularly after the financial crisis that they started traveling northwards in Europe to obtain money. In Romania, there is a separate «black market» arranging travels to Scandinavia. For a bus ticket, they pay 150 Euro.

«They also travel much domestically and among the Scandinavian countries. This they tell that they also do not really want to do. Most of all, they would prefer to stay in Romania.»

Life after the end of the journey – back to society?

«None of them want to settle in Norway,» according to Ugelvik and Damsa.

So what is the ultimate dream?

«They dream of getting enough money to return to Romania, buy a house and start a family. Life on the street is hard, and prison becomes an obstacle on the road to a 9-to-5 life in the Romanian countryside. Most do not last beyond their 40s or 50s, when they ‘retire’ from the hustler lifestyle. None of them want to stay, they want to go back to Romania.»

This is what keeps them going, that is the dream.

«Seen from the perspective of Norwegian correctional services, foreign inmates such as the Romanians in our study represent many challenges. The language problems make it more difficult working with them. Faltering communication can create frustrations and misunderstandings, which in turn may well be used to confirm the experience of discrimination. In addition, there are the difficulties of preparing a constructive release process. Often the prison does not know whether an inmate will be allowed to stay in Norway or has to leave the country until a few days or even hours before release. And if the person in question is returning to the home country, how may Norwegian prison officers work to aid in procuring a job or housing? Many say you can just forget about that. In Romania, there is no legal work, so they have to hit the road again whether they want to or not,» Ugelvik concludes.

Roma and Romanians in Norwegian prisons

About the EEA program

An Ethnography of Prisoners' Transitions (EPTrans) is funded by the EEA program at the Research Council of Norway. Norway has bilateral research collaborations with six countries, financed by the EEA funds: Estonia, Latvia, Poland, the Czech Republic, Hungary and Romania. The EEA funds represent Norway’s contribution toward social and economic equalization in Europe. The funds are channeled to 15 EU countries in Central and Southern Europe. The Research Council of Norway coordinates Norwegian participation in six bilateral programs.